After my homestay at Goulmima, my hosts drove me to Erfoud about 80km away and home of the annual date festival.  On the way to my new accommodation, we visited the Erfoud Fossil Museum complete with a giant dinosaur skeleton out the front and many interesting objects made from  – or incorporating – fossils, for sale at reasonable prices. Then we arrived at a lovely auberge called La Rose Du Desert (named after an interesting rose-like crystal formation sometimes found in the desert).  I appreciated the privacy and spaciousness of the bungalow I occupied, particularly after the home-stay shared with a family. It was also a surprisingly tranquil place given that it was apparently fully booked.

I enjoyed a Moroccan mint tea in the inn’s garden, which abounded with date-laden palm trees and a lovely pool; it felt wonderful after the hot drive getting there.  During my stay at this auberge, I continued to wear my traditional Berber dresses, which are loose and made of brightly-coloured linen and usually with lots of tassels and embroidered flowers. Unsurprisingly, these are more comfortable than western clothing in the Moroccan weather. It was also my experience that Moroccans love it when they see a westerner wearing their traditional clothes. They will often comment on it, and then go out of their way to assist you – even the uniformed men at airports! Moroccan time and Moroccan cooking are both slow, so I made sure I let the auberge staff know early on, what I wanted for dinner later that evening. I felt very secure at this auberge; the staff were friendly and well-known to my Goulmima hosts. 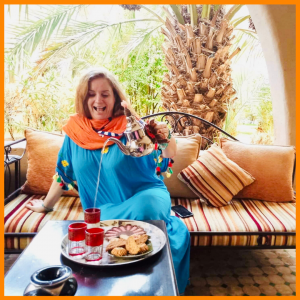 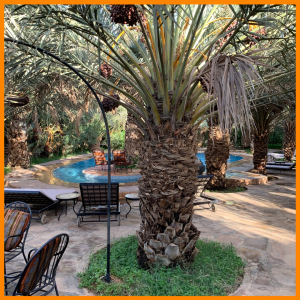 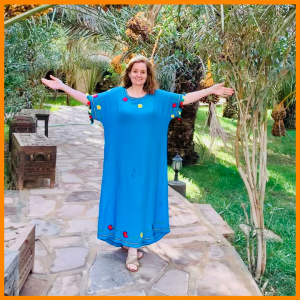 The following day, my new Goulmima friends who had stayed with family in Erfoud overnight, picked me up from my auberge and we made our way towards the desert via Rissani, and the famous Rissani markets. Mouna showed me around, pointing out the unusual things on display and their uses, particularly plant products used for medicinal or cosmetic reasons.  Morocco, particularly in the south, remains largely reliant on apothecaries, not pharmacies!  Although Mouna and I communicated in French, on a previous occasion when I was at these markets, I was shown around by a young man who spoke with me in what he smilingly referred to as “desert English” (mainly picked up from tourists). This was fine and his fee was about 300 dirhams or 30 euros for the morning. The most striking thing I remember about my young desert-English guide was his kindness in communicating with the deaf-mute son of a shop-owner, whose place was filled with artisanal products and fascinating old things from the desert including coins with inscriptions in forgotten languages.  I also recall his pointing out two donkeys fighting at the Rissani donkey sale and saying to me, “Like two men over a woman”.

With Mouna, I revisited this shop of artisanal products located on the edge of the markets. Surprisingly, the owner who was standing on the path out the front of his shop recognized me from years before and greeted me. He still put water out the front for the birds and his son was still there, somewhat taller now.

After perhaps two hours at Rissani, we decided to continue our journey onto Merzouga, the small town at the foot of the Erg Chebbi dunes where I was to stay at L’Auberge du Petit Prince.

Le Petit Prince is a rather intimate, three star plus auberge close to the heart of the small town of Merzouga. The proprietor is a charming, kindly gentleman, with a reputation for being a person of few words, called Zaid. It is an establishment with an extremely relaxed, laid-back, family-feel. When I was there, many French tourists were also staying, who seemed to be regulars. It was late October and the time of the desert dune rallies in the area, but those drivers were clearly accommodated elsewhere, perhaps in hotels for larger groups. We spent a relatively quiet afternoon at the auberge, and had a traditional vegetable soup of the region for dinner.

The next morning I walked through the local oasis to the women’s cooperative (where I had bought the Berber clothes I am wearing in the photographs) to buy another dress that cost me 200 dirhams or about 20 euros. Then Mouna and I returned to the main part of Merzouga where she and I walked up and down the main street soaking in the ambiance of this exotic part of the world. Later that same day, we commenced our journey to visit the nomads. It should be noted that our visit was not intended to be a tourist excursion to a desert camp as many of the local hotels offer, with modern toilets and western-style beds in many instances. Rather, it was a visit to a real nomad camp to stay with them and authentically, albeit briefly, experience the true nomad way of life.

If you’d like to visit Rissani markets and be taken to the shop whose owner recognised Cara from her previous trip (as described here) contact us at Aussies In Morocco Tours™.  Who knows, we might be able to organise for our desert-English guide to take you around, if you want. 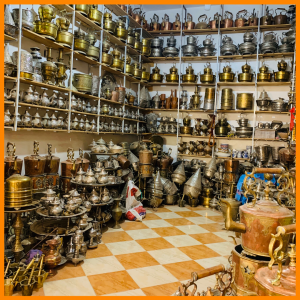 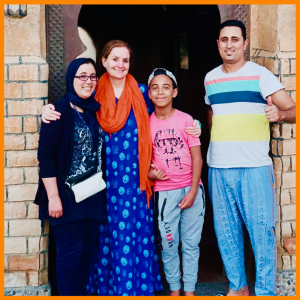 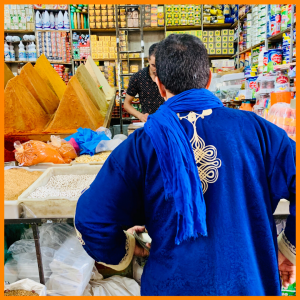 Next up – Part 3  coming soon: My Journey to Stay with the Nomads