A Wet and Wild Sunday Afternoon

This blog post was originally published in February 2020. Obviously with COVID this tour did not proceed. For expressions of interest about a similar one once international travel resumes between Australia, Europe and Morocco, please send your expression of interest to holidays@aussiesinmoroccotours.com.au 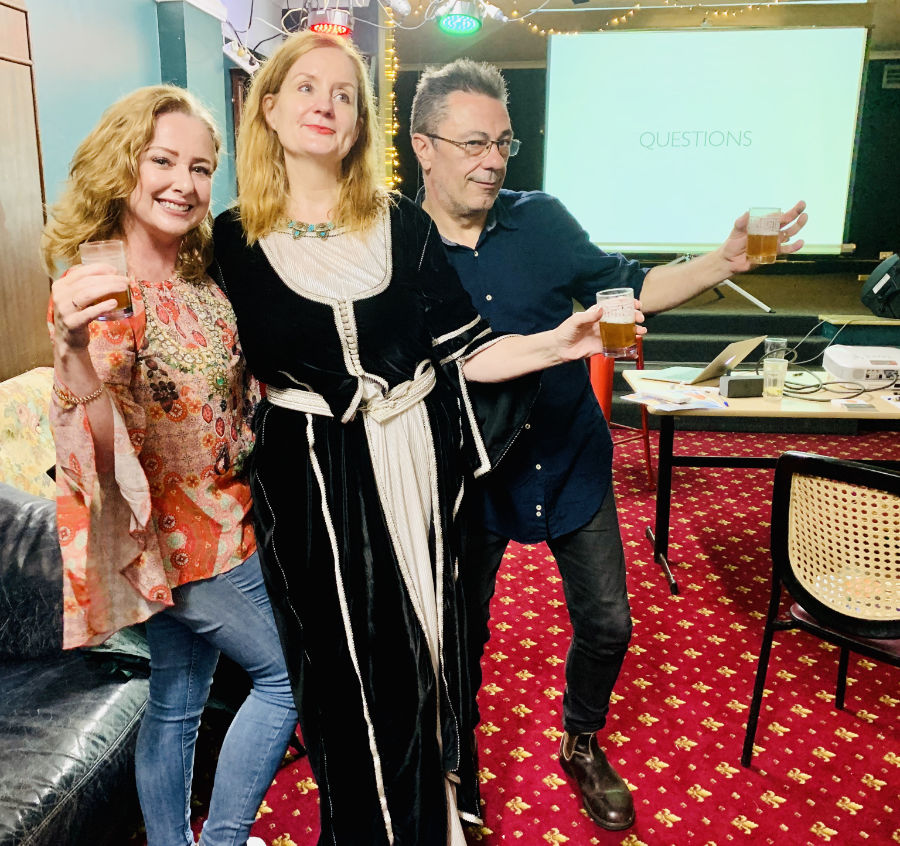 On Sunday 9 February, 2020 a small group of us gathered in the bowels of the Petersham Bowling Club to hear Joe’s inaugural presentation of his photography tour in September 2020.  Joe is a professional photography teacher of many years standing (Smarter Digital Photography) and a fun personality.

A few, perhaps three or four, cancelled due to the seriously inclement weather, however in attendance were:

Charlie later told me over tea that he was a devotee of the Norse religion – whatever that is –and that he worshipped the Norse gods. Of his Norse chants at midnight Maree said (in Charlie’s presence), “They don’t bother me at all.” (Joe later told me, he would send me a recording. Ha ha.)

Fatiha arrived with her beautiful Moroccan biscuits and accoutrements for making Moroccan tea, complaining about the weather and the venue (I think that as a devout Moslem she wasn’t keen on the presence of alcohol) so it was I who ventured upstairs to the drinking area to fill her large kettle with hot water.

While Fatiha prepared the afternoon tea Joe spoke about the tour with photographs and maps on a large screen. After the mumblings about the weather had dissipated (Fatiha had helped me hitch up my Moroccan caftan over my belt, so it stopped dragging through water when I’d gone outside earlier to find her), the ambiance became very upbeat and positive. Adrienne had been to Morocco before in the 1970s and spent about three months in and around Meknes. She had then returned for a garden tour of Morocco in the 1990s. She was happy to consider returning once again with Joe’s tour, as were Hicham and Yassine. Raby said she would put up information about the tour on her work noticeboard at Qantas. She said she would love to go with a group of friends, but would not go to Morocco alone. Sam (who totally irrelevantly has a Degree in Divinity and is an aestheist), said his attendance on the tour all swung on the future sale of a property in Cyprus.

The entire session went for about 90 minutes and Joe spoke about holding another one shortly. We are also currently in talks to do a presentation of Joe’s tour to the Spanish-Australian Chamber of Commerce (La Camara), because many Spanish-Australians go to Morocco as a side-trip to a holiday in Spain, due to the countries’ proximity to each other. In fact, we have a blog post about why Morocco is an unmissable side trip to your European sojourn here and a blog post about why visiting both Spain and Morocco is easier than you think and makes a lot of sense here.

Also, Joe as well as being a professional photography teacher, is bilingual in Spanish and English. This is useful because Spanish is widely spoken in the Moroccan tourist industry, again because of the proximity factor and in Tangier it is particularly notable how much Spanish is spoken in the streets. (We have a blog post about Tangier here.)

In my other life as a lawyer, I worked for Thomson Geer Solicitors, which is a corporate sponsor of La Camara. This is where I first met La Camera’s current Vice President (and former President) Sylvia, who is a partner of Thomson Geer.

We didn’t capture everyone in our photos of the day, but we do show a selection that was taken, with this blog post. Sorry we missed photographing Sam, Adrienne and the Norse Gods’ devotee. But Charlie if you are reading this, can you please ask Thor to leave us alone next time?

Seriously though, if you want details of any upcoming information session for Joe’s tour or just about going to Morocco in general, please get in contact with us at holidays@aussiesinmoroccotours.com.au