For many people their first experience in Morocco, and in Africa, is taking the ferry from Spain to Morocco. With just over 14 kilometres separating the two continents, it’s an easy day trip. But, Tangier is worth so much more than just a quick walkthrough. Whether you make it your base for a Morocco trip, or put down roots for a few days, you won’t be disappointed. First, a little of its colourful history.

There is perhaps no other city in Morocco that has the same reputation as Tangier. It became notorious in modern times thanks to tales of espionage and drugs, but the story of the city extends much further back.  Originally, the area was home to the indigenous Amazigh (Berber) people of North Africa. It’s believed to have been founded as a Phonecian colony as far back as the 10th century BC. From that time forward various groups invaded and called Tangier home. The Carthaginians, Romans, Vandals and Byzantines all left their mark, before the Arab invasion in the early 700s.

In the 700s it became a part of the Umayyad Kingdom – ruled from the east. They ruled with a heavy hand and were widely detested by the Amazigh people. Not surprisingly the port city passed through the hands of many more rulers and powers until the present day. Most people today know of Tangier because of its reputation as an international city.

In the 19th and 20th centuries, it was a hotbed for diplomatic activity.  By the 1870s, every foreign embassy and consul in Morocco was located in Tangier and yet only 400 foreign residents called it home. In 1923, the city itself became an international zone and was rife with espionage and backdoor dealings. In 1956, the city was returned to Morocco’s full control.

While in the middle and end of the 20th century the city became rundown and often forgotten in development plans, the 21st century has seen a lot of changes. The Tangier of today is much different and a truly lovely place to visit. 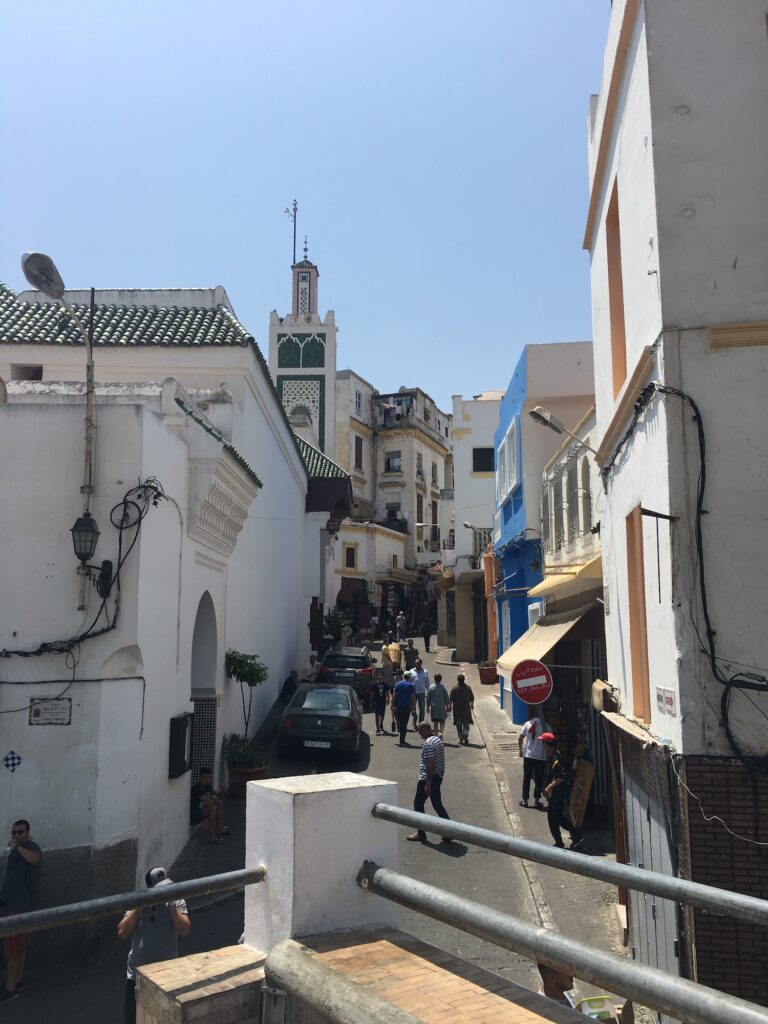 The early 20th century brought many rising literary and artistic figures to Tangier. Tennessee Williams, Jack Kerouac, Paul Bowles, William Burroughs and Mark Twain just to name a few strolled Tangier’s streets, sat in the cafes and wrote about their experiences. Eugène Delacroix and Henri Matisse are some of the more famous painters who put Tangier to canvas.

There are also dozens of Moroccan writers and artists who have brought their home to life, though the written works are often less accessible to an English-speaking public as they are in French or classical Arabic and rarely translated to English. You can’t miss the artwork you’ll find throughout the city in shops – and on walls. A stop at the Museum of Contemporary Art can also provide you with a deep dive into the modern creations of Moroccan artists.

No matter where you go in Tangier you’re surrounded by history, but when visiting with a guide who is knowledgeable in these specific anecdotes of history they can be worth their weight in gold. Even if you are normally someone who loves to explore alone, having a licensed guide to show you the way is immensely helpful and adds significantly to your experience. 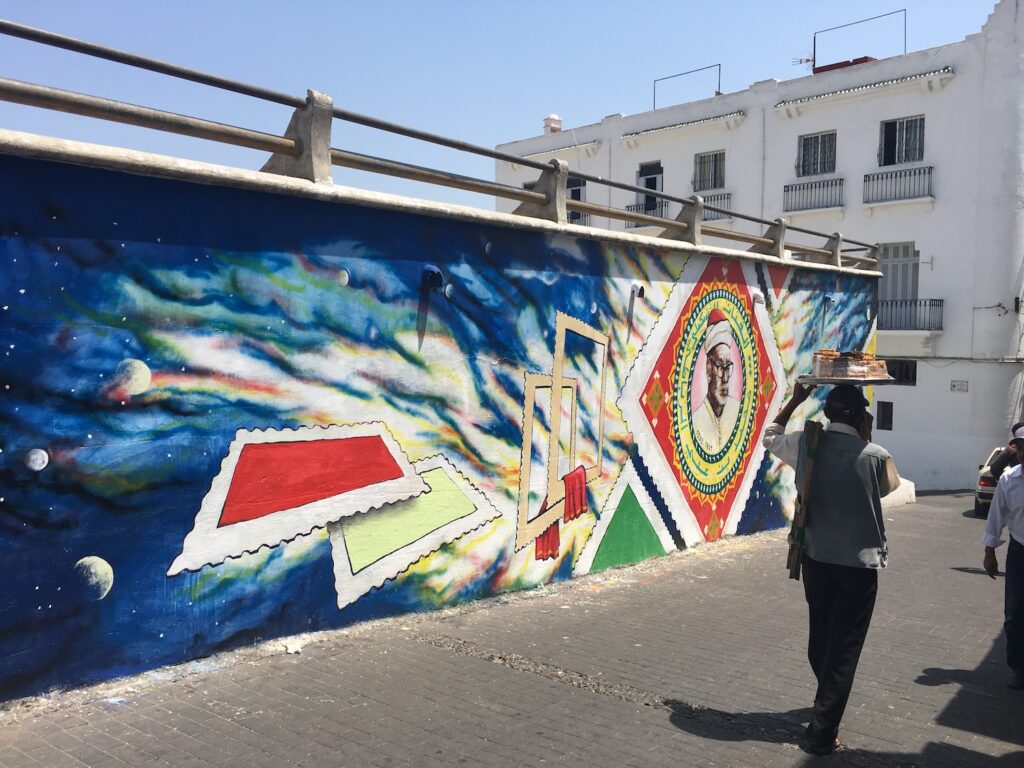 Looking for some great shopping while you’re in Tangier? You’re in luck, because there are some amazing spots to hit up. Some favourites to visit include Madini Perfumer, where you can bring home a little scented souvenir of your trip to Morocco. Las Chicas is a lovely concept store with a wide range of unique goods and a tasty restaurant for when you need a break. Proceeds from items sold in their shops benefit the programs of DARNA, a social project to aid women and children of Tangier through skillbuilding as well as a safe place for kids to meet. Librairie des Colonnes, perhaps one of the most famous bookshops in the city, shouldn’t be missed either.

If souks are more your thing, then you won’t be disappointed. Walk through the souks and explore everything from handmade rugs to everyday goods that fill the marketplace. Even if shopping isn’t your thing, it’s fascinating to see all the items for sale and you never know if you’ll stumble across that little something you just can’t leave without.

3   Get filled up by Tangerine specialty foods

It shouldn’t come as a big surprise that some of the most famous dishes eaten in Tangier come from the sea. Fish and seafood play a major role in the diet of this city. Of course, fish tagine is something you shouldn’t pass on. This fish soup, that almost always features on the menu at the famous restaurant Le Saveur du Poisson, is sure to be a palate pleaser.

If fish isn’t your thing, don’t worry as you’ll find other wonderful Moroccan dishes as well. Do seek out a slice of kalinte on the street. This chickpea bread/snack is made only in the northern regions of Morocco and is dusted with cumin and paprika producing a melt-in-your-mouth, creamy texture.

4   Make it your base and visit nearby cities

Tangier is amazing to explore on its own, but thanks to good transportation options you can also use it as a base to explore some of the nearby sites and cities that make up this part of the country.

Take the train 30 minutes to Asilah for a small town vibe, where the walls are covered in street art. Wandering here is so laid back! Enjoy a meal at one of the local restaurants or head to one of the beaches for swimming.

With the aid of a guide and a driver, a trip to the Lixus Stones in Larache is a unique experience. These Carthaginian and Roman ruins are some of the oldest in Morocco. Also, nearby are megalithic stones that are believed to be from a sun-worshipping people that pre-date even these ancient settlements.

Finally, consider Tetouan as a day trip as well. It’s about a 90-minute drive, but this lovely city is a must especially for art lovers. It was the capital of Spanish Morocco, so much of the architecture heralds this history. The city itself has few tourists and has retained a lot of the traditional feel – making for a special experience. Even in Tangier the Spanish influence can be seen in the architecture, the lifestyle, and you’ll catch snippets of Spanish still spoken by locals in the streets.

Sure you can spend all day wandering the streets, popping into shops and filling up your stomach, but as much as Morocco is about the seeing and doing, it’s also about slowing down. Tangier has several beaches that are accessible as well as plenty of places you can lay by the pool or sit gardenside whilst sipping mint tea or something with a bit more punch. Don’t let the desire to “see it all” stop you from slowing down and savouring what has drawn so many people to Tangier, and Morocco itself, for generations. 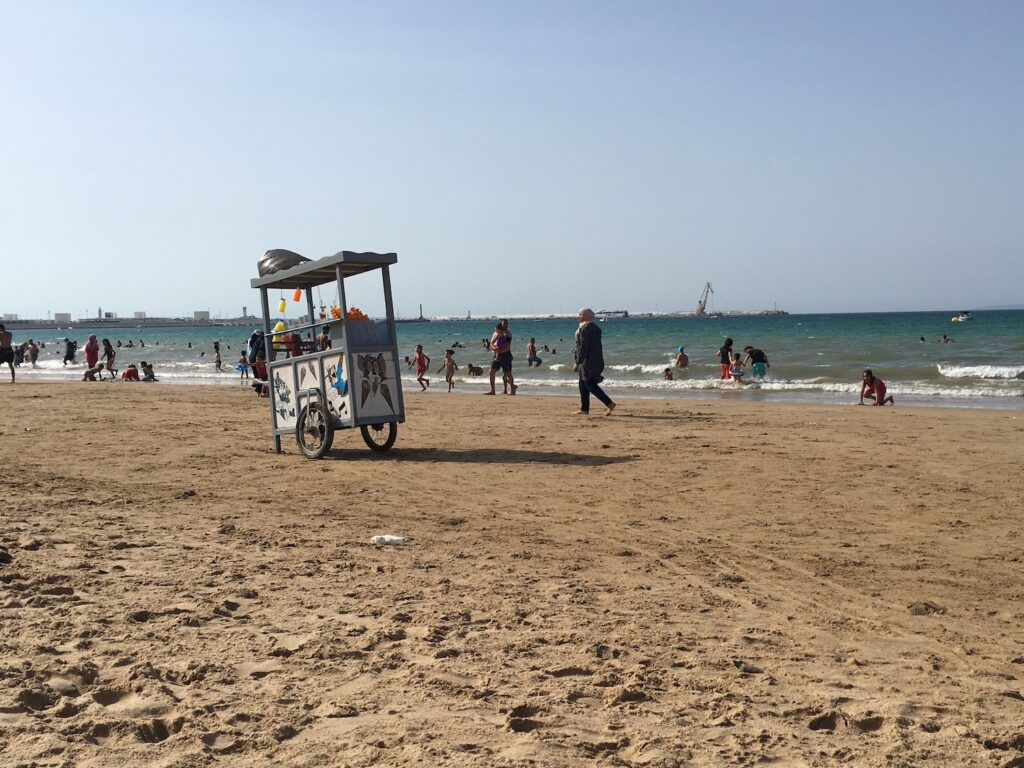 Aussies in Morocco Tours™ can help you arrange your time in Tangier – and Morocco. Whether you decide a day trip is enough for you, or you want to make Tangier a larger part of your itinerary, we can design a custom experience that takes all your desires into consideration. Our principal Cara has a particular interest in Romantic Art, and you can expect an upcoming blog post about the Moroccan influence on Eugène Delacroix, Henri Matisse and Salvador Dali as well as information about a proposed tour following in their footsteps. If you share Cara’s interest in art and want to enjoy that part of Tangier’s colourful history (no pun intended), then we’d love to hear from you.