The Eco-Aspects of Traditional Moroccan Accommodation

Imagine you have just arrived from Australia via Casablanca and been picked up by our team at Marrakech airport. You are dropped off on the outer edge of the Medina as the old streets are too narrow for vans. The taxi van driver and a staff member from the riad where you are to stay, who has come to collect you, briefly exchange greetings, before the former departs. Your luggage is now being pulled in a cart by a porter, who leads the way. It is hot, steamy, noisy, crowded and you are tired. 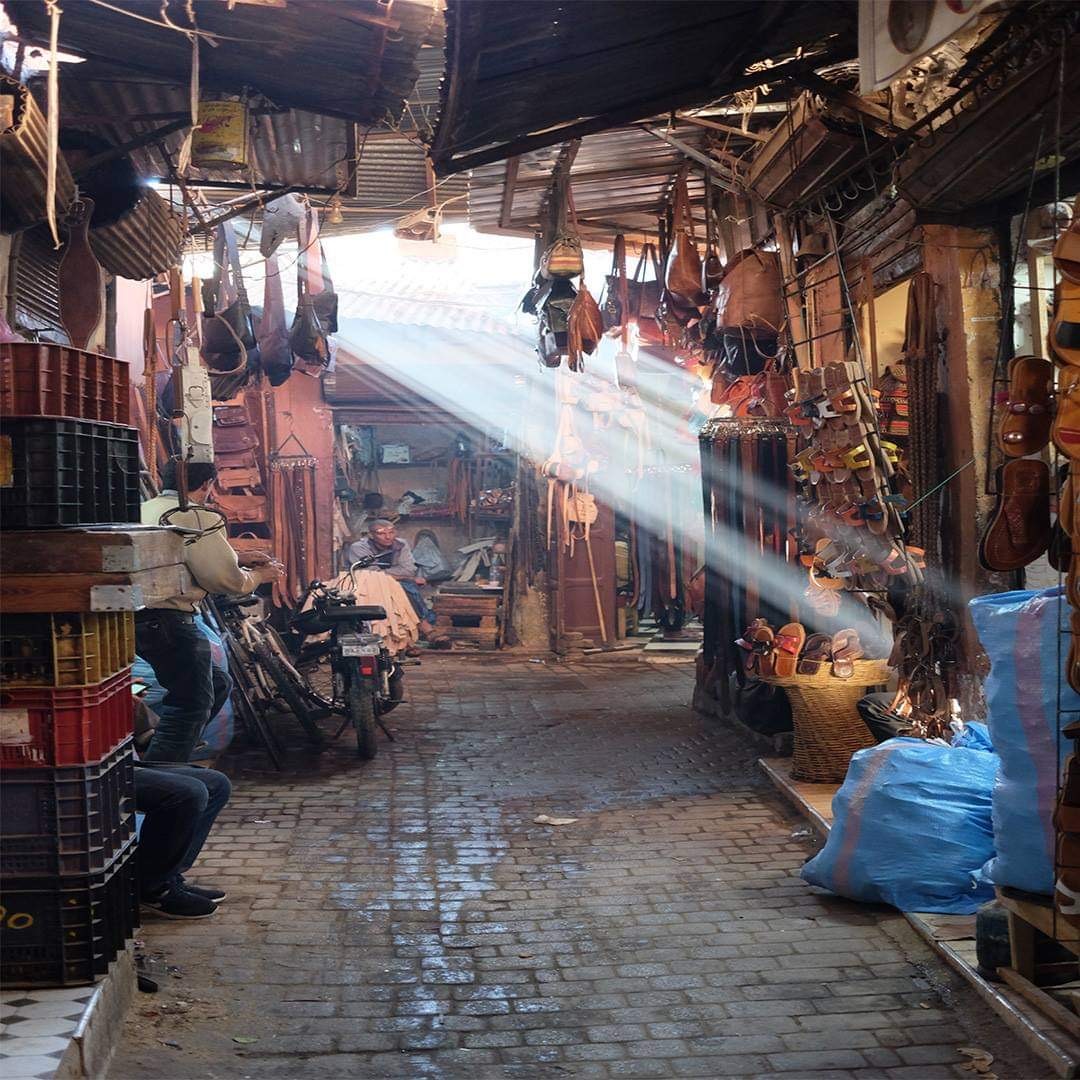 The Medina of Marrakech before the crowds

Turning a corner, you catch a glimpse of a traditional hammam (public bath) where the toothless lady managing the entrance smiles sweetly in your direction. You continue down a narrow, windowless alleyway to a simple wooden door. You pay the porter a few coins for his service whilst the riad staff member, who is with you, fiddles with his keys before opening the door to let you into a veritable oasis of coolness and tranquility – sheer bliss!

Just a few steps into the courtyard you are offered some refreshing tea and biscuits baked in the coals of the hammam you had just walked past. You watch the tea being poured for you Moroccan-style, sitting amidst the orange trees next to the small central fountain. The resident chameleon, ginger cat and tortoises keep a collective watchful eye on you, whilst your luggage is taken to your room. It is as if you have not only stepped back in time but also into another magical world – the very private enclosed world of the riyad.

In this blog post, we share some details of the eco-aspects of this private world and the larger community of which it is part. 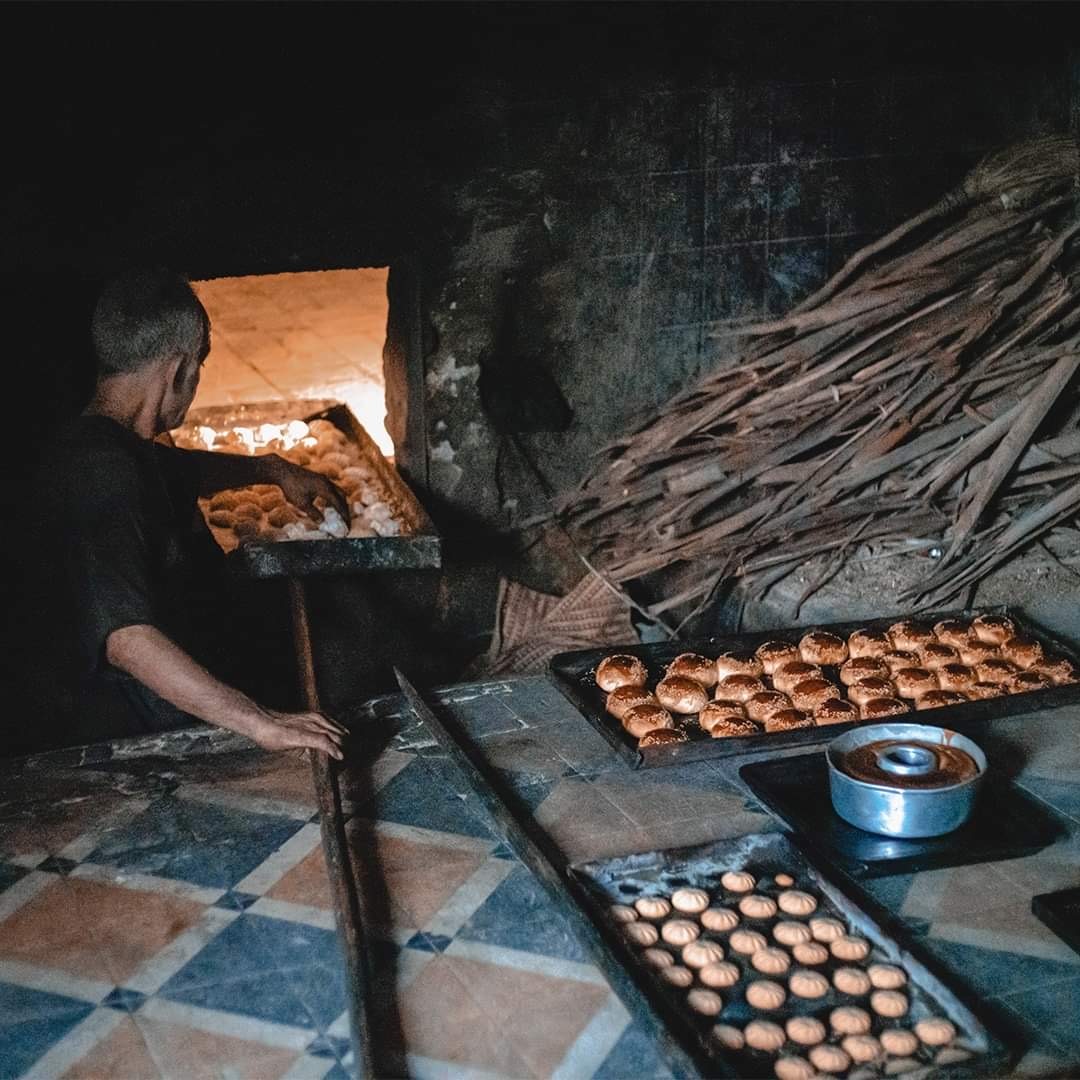 The Eco Aspects of Riads

An essential part of your Aussies in Morocco Tours™ experience will involve staying in riads. These traditional dwellings are typically constructed of eco-friendly rammed earth or mudbrick (also known as adobe), involving ancient techniques dating back to at least 9000 BCE! Unlike the concrete employed in the construction of some modern Moroccan resorts, these locally sourced artisanal materials have natural insulating properties and blend well with the surrounding landscape.

Adding to your eco-friendly experience will be the traditional design of your riads. Typically, they will have an inner courtyard, open to the sky but insulated from the heat outside by the thick, windowless, exterior walls. Historically, in the Islamic world, there was a religious element to these interior gardens, the water and greenery being associated with images of paradise. Water also connotes wealth and life.

You will certainly feel you are in paradise as you cool off and relax, perhaps by a fountain flowing into a gently rippling pool surrounded by citrus trees, after a long hot day sightseeing, bargaining for mementos in the local medina, travelling over sun-baked dusty roads; or as we said earlier, after a long flight.

One of two main types of traditional domestic architecture in Morocco, the riad (or riyad) is affiliated with the kind of Moorish architecture to be found on the Iberian peninsula, specifically in Andalusia (or Al-Andalus), such as the Alhambra in Granada, Spain. In fact we talk about the architectural and other links between Morocco and Spain here.

This form of house design, with the rooms surrounding an inner courtyard (or atrium) and a pool at the centre, was a common feature across the ancient Middle East and the ancient Greco-Roman world.

If you are interested in this history, and your Aussies in Morocco Tour™ includes Meknes in Morocco’s north-east, you will be able to visit the ancient archaeological site of Volubilis. This was originally the site of a Berber (Amazigh) town. It succumbed to Roman influence circa 146 BCE. 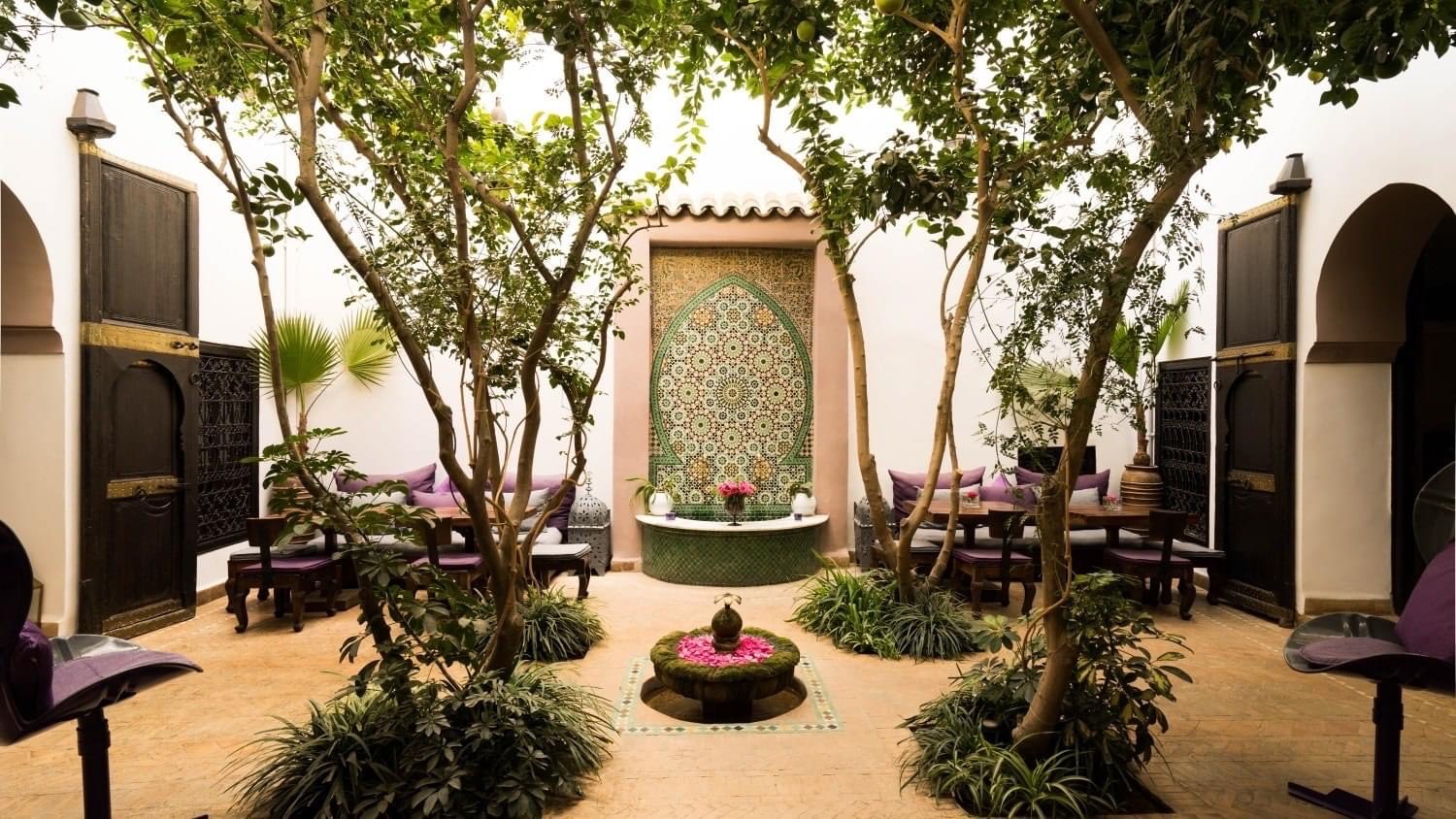 Copyright, Riad Houdou. With thanks.

The Eco Aspects of Ksars

The ksar (or qsar) has been described as one of the main manifestations of Berber architecture.

The term ksar is of Maghrebi Arabic origin and means “castle” or “palace”. (In fact, when you look at it, the word is not so dissimilar to “Caesar” is it? Even “Tsar” and “Kaiser”.) The term has also come to mean a fortified village, such as the UNESCO World Heritage Site, Ksar Ait Benhaddou, which has been fortified since the 11th century.

If your Aussies in Morocco Tour™ includes a detour to Ksar Ait Benhaddou, do not be surprised if it looks familiar as it has featured in numerous films, including: Time Bandits (1981), The Living Daylights (1987), Gladiator (2000), Kingdom of Heaven (2005) and most recently David Attenborough: A Life on our Planet (2020), to name but some.

Typically, the Moroccan ksar will be of adobe or rammed earth construction and consist of rows of attached houses. Being connected by common walls is yet another eco-friendly measure to reduce heat within these homes, as only the exterior walls and the flat roofs take direct heat from the sun.

Another obvious feature of a ksar is an outer protective wall which encircles the entire “village” complex. Above all, the ksar is a community and will typically have communal structures such as a granary, mosque, bath, oven, and shops. On your Aussies in Morocco Tour™ you will have plenty of time to navigate the maze of narrow streets and explore the shops, should you wish to do so. 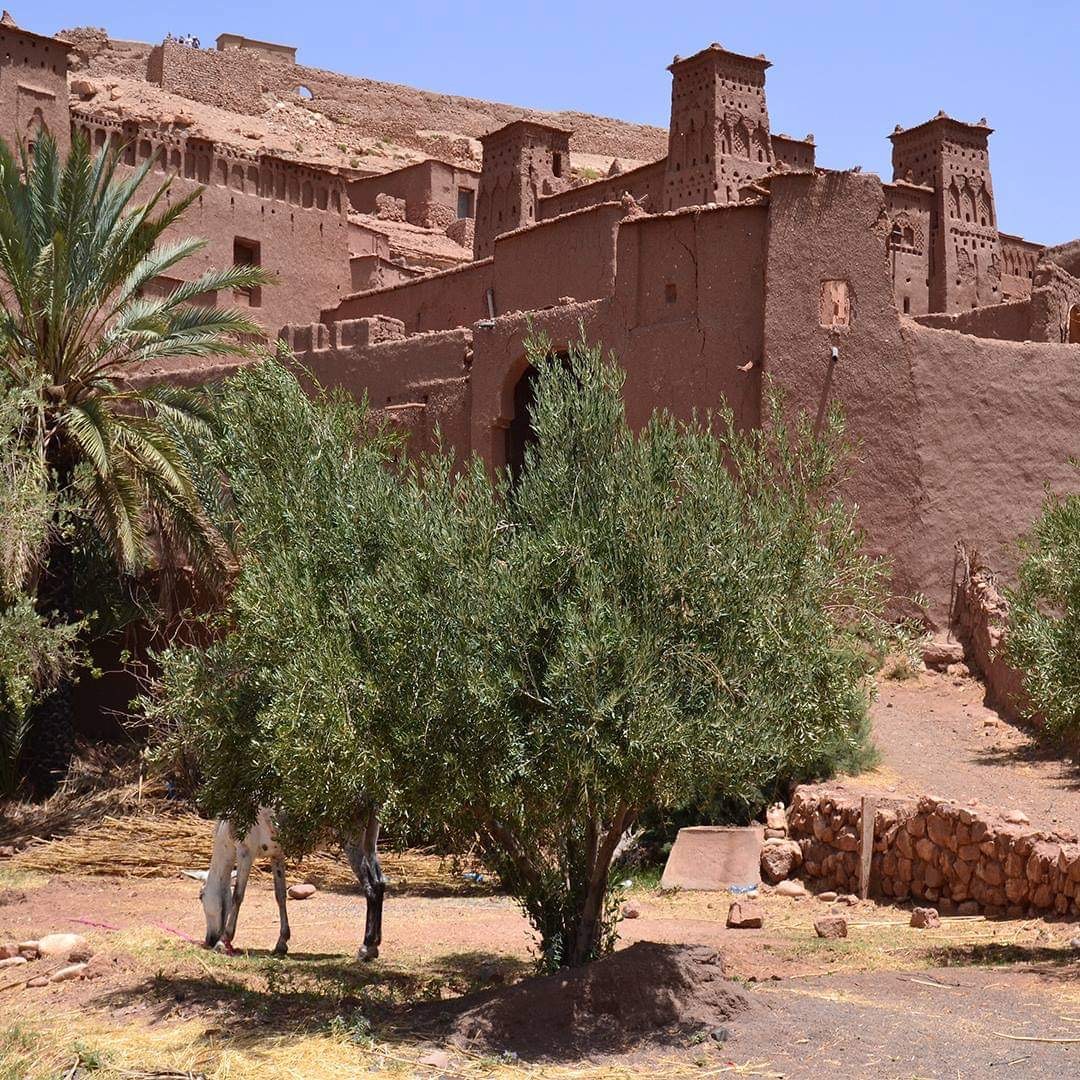 Traditional architecture of the south waiting to be explored.

Just a word of “warning”. These days there may be the occasional accommodation option built along modern lines, using concrete for example, but made to look old. We have noticed this around Ourika in the mountains outside Marrakech, rather than in the south.

On the other hand, we at Aussies in Morocco Tours™ try at all times to book accommodation that is truly constructed and designed along traditional lines, wherever possible, albeit with modern conveniences. Thus we avoid concrete options that nonetheless (deceptively) appear traditional, because basically it seems inauthentic and authenticity of experience is one of our core business values. We want to give you a real “step back in time” experience, as much as possible.

For further information about traditional accommodation options in Morocco please check out our blog post about them here. (Please note that the kasbahs referred to in this earlier blog post are smaller scale than ksars. A few ksars may for example contain a number of kasbahs).

For an example of the type of accommodation we offer, please see the website of Riad Houdou here, which has a solarium and heated swimming pool in addition to the more traditional accoutrements of riad living. The owners/managers are French but their English is fine. Their riad dates back many centuries and has an interesting history if you care to ask them about it.

We look forward to hearing from you. Bienvenue!

« Respect. By our Principal, Cara

The Most Common Complaints About Travelling in Morocco »