Aussie in Morocco Tours™ contact in Fez has recently interviewed five artisans who are representative of various crafts the city offers – her brief was, “honest and skilled”. Upon booking with us we can provide more information to you for each of these and their locations, as well as the name of our Fez contact – it is all on our Facts Sheets. However, in the meantime, here is an overview of the craft experience in Fez.

Just before that though, a brief word of advice from our founder, Cara, here.

Our first stop is at the workshop of Damascene master craftsman, Said Akessbi in the saddle-makers’ street. He says the challenge of his work is that iron is a stubborn material and very difficult to cut. Just pick up one of his hands of Fatima and the quality of the workmanship will impress you – it combines a layman’s metal such as sheet iron with a delicate silver thread. Watching him work using a jade stone tool, which was double the size when he first inherited it, the metal transforms as if by alchemy until it is ready to be oiled to a high shine.

Said’s shop is in Saddle-maker’s Street because, traditionally, Damascene work adorned stirrups and formed part of the tackle for horse dressage. 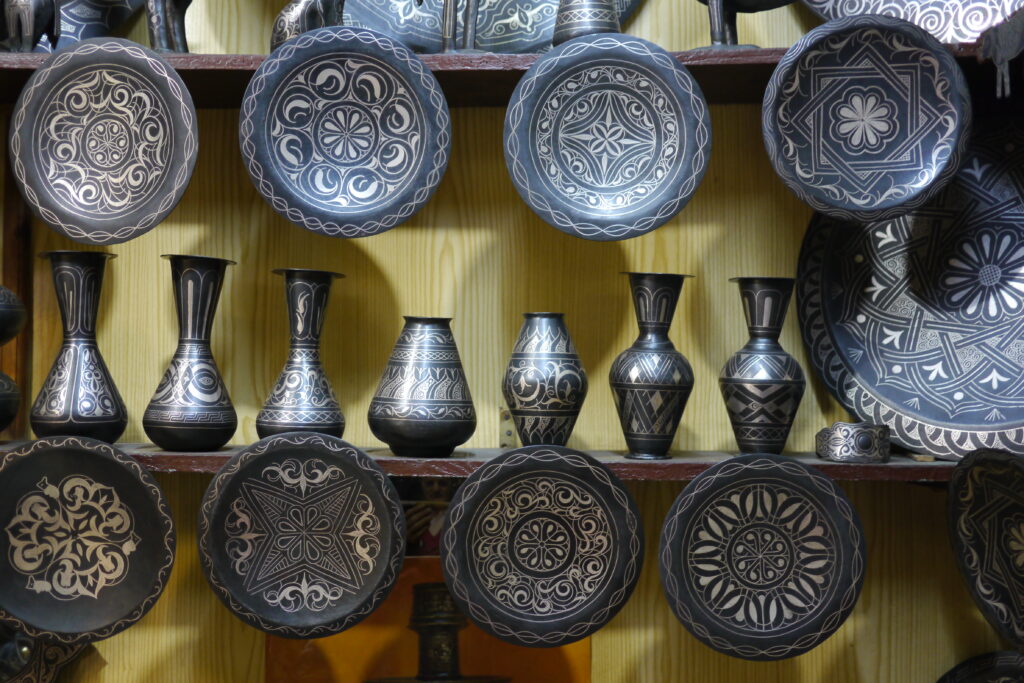 It is unlikely that a photograph taken in the sombre light of the Fez medina can capture all the intricate beauty of the patterning.

Our next stop is to visit the leather craftsman, Abdelsalam Boughlroud, in the newly developed artisan’s complex in Placa Lala Yedouna.  It houses five buildings – each dedicated to a different craft –  so this could take you a while to explore, but there is no better opportunity to see craftsmen in action and to purchase their wares if you are interested.

Seventy-year-old Abdelsalam says Fez leather is renowned for being soft, because the water is sweet.  Rabat and Marrakesh also process leather, but he says Rabat’s leather is processed in salty sea water, and Marrakesh’s water is heavy in lime. As a leather-worker he can easily distinguish the differences. From tanning to stitching, Abdelsalam’s leather goods are crafted using techniques developed when Fez was first founded over 1000 years ago – Abdelsalam even mixes his glue in the traditional way himself. Handbags, wallets, purses and even shoes dangle on display in his workshop on the ground floor of the artisan’s complex. 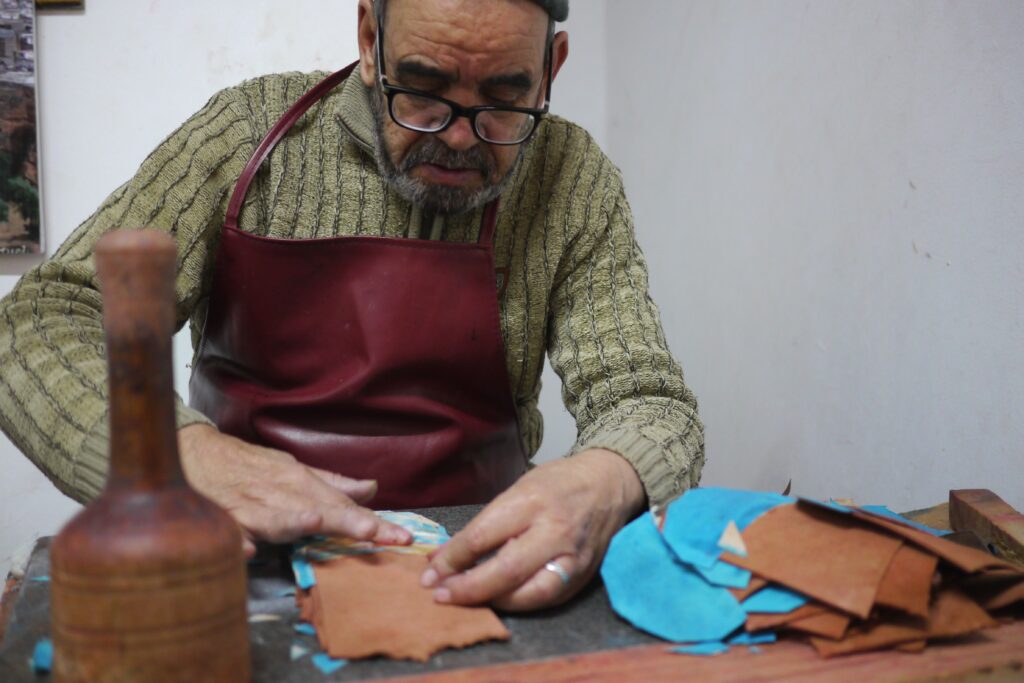 The Master Craftsman at work. 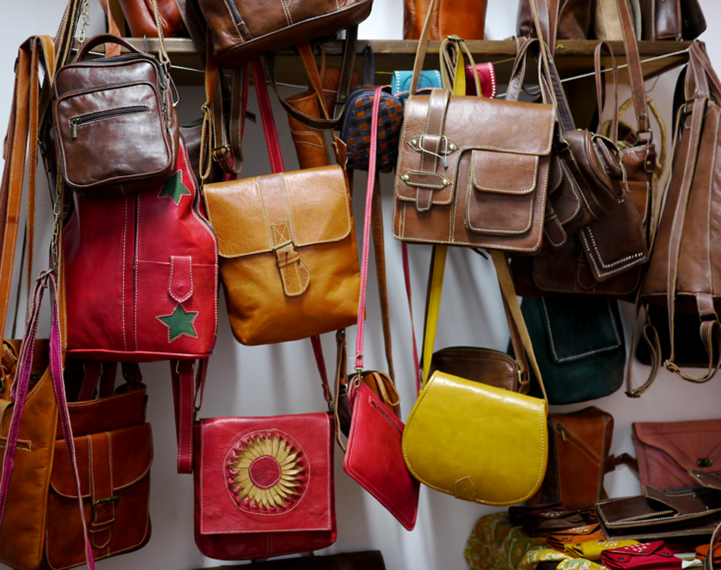 Everything is hand-crafted, right down to the stitching work on the edging of his purses & bags. Nothing in this workshop needs electricity, except the light & radio.

Move on to the heart of the Fez medina where a newly renovated funduk houses the work of embroiderer, Amina Shaber. She is part of a textile cooperative called Jna Kaftan, which also fills commissions from tailors wanting cloth for special-occasion kaftans, embroidered before sewing.

Our interviewer describes her as a “sweet natured woman in her late 50s” who says, “you must be able to sit for hours at a time, in between domestic tasks, to complete anything substantial”. The pieces on display showcase four styles of stitching – Rabatti, Fassi, Meknes and Trzmta – some of which use a prestigious gold thread called s’qalli.

Amina learned her craft as a young woman, putting in up to six months of dedicated practice to master each embroidery style. She says the challenge with embroidery, like all handcrafted textiles, is the time it takes to produce each piece – it takes many months to create a densely stitched runner in the fassi stitch. 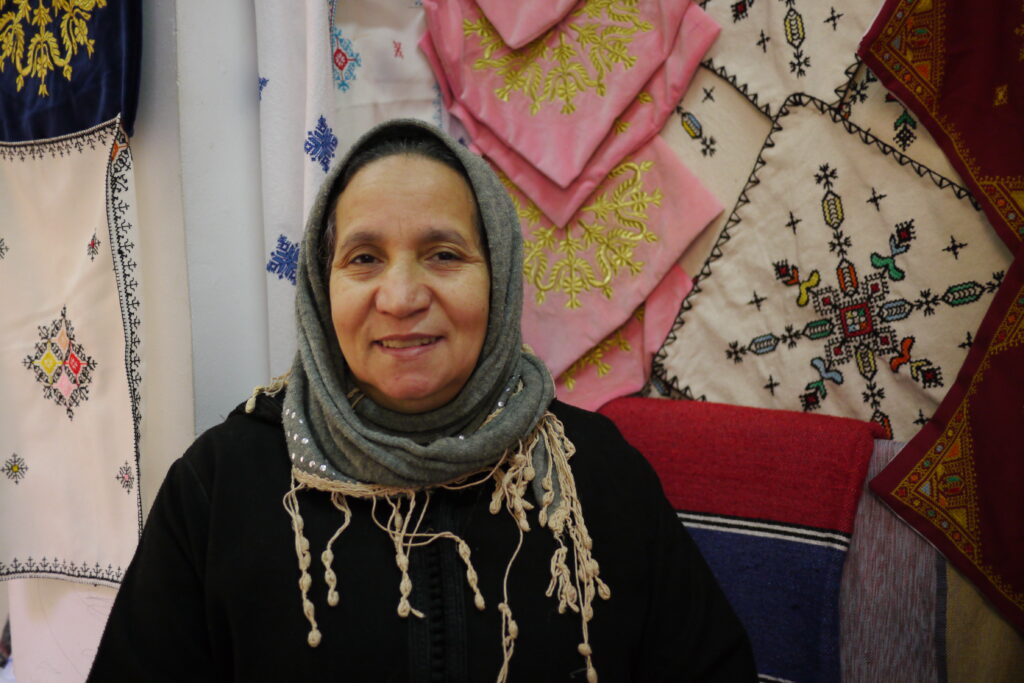 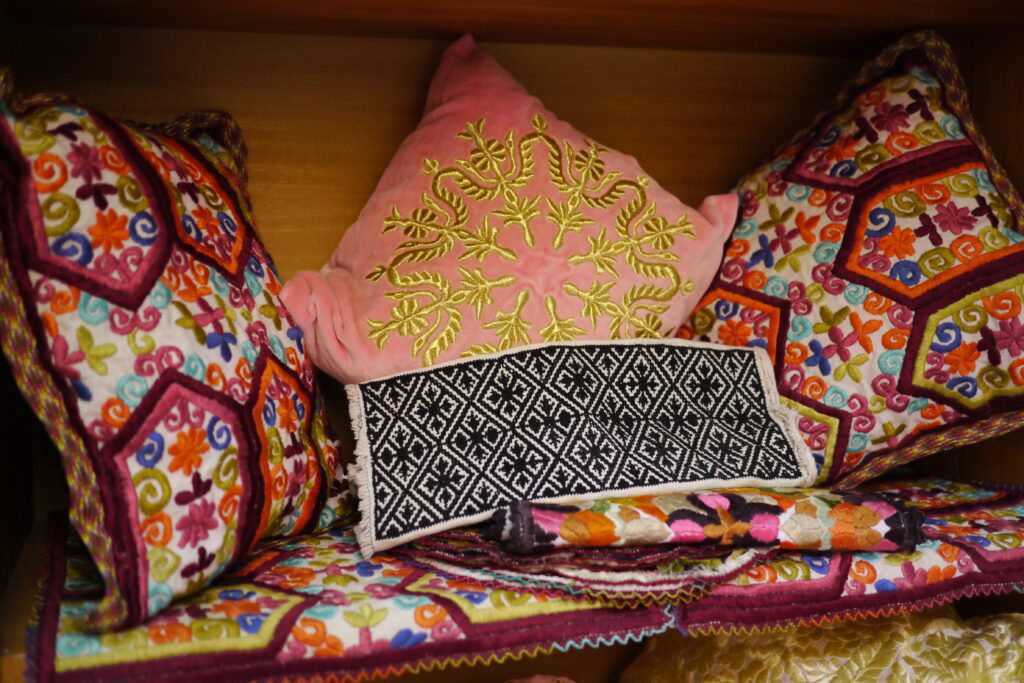 Now look just a stone’s throw from the Kairaouine Mosque and find the shop of master comb-maker, Mohammed Saili. Now close to 90 years of age, he is nimble, witty and hospitable. His workshop is one of the rare traditional spaces with a raised floor. Despite his age, to enter his workspace Mohammed grasps a knotted rope that hangs from the ceiling and jumps up to the metre-high raised platform. There, he works cross-legged most of the day.

Combs are not the only item Mohammed shapes from cow bones and sheep horns. Rings, kohl sticks, buttons and, of course, shoe horns are amongst the stock adorning his walls. Purchasing a trinket from Mohammed is a souvenir of not only a traditional craft, but of the man himself. 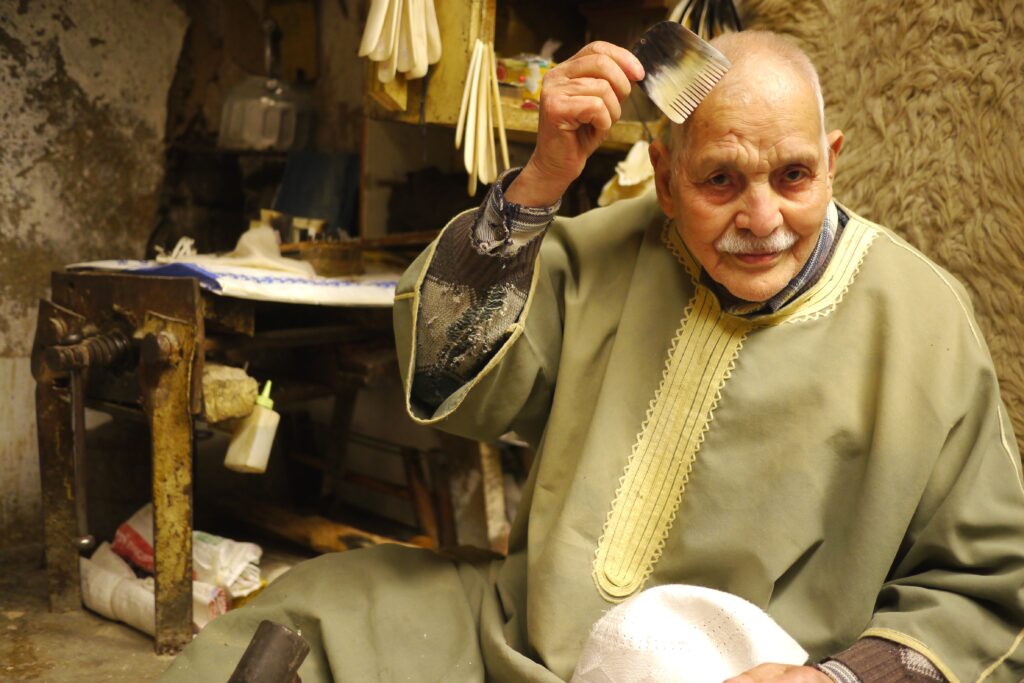 When Mohammed began his craft some sixty years ago, there were nine or 10 comb-makers on his street – now he is the only one left. He says, “to stop working is to stop living all together…”. 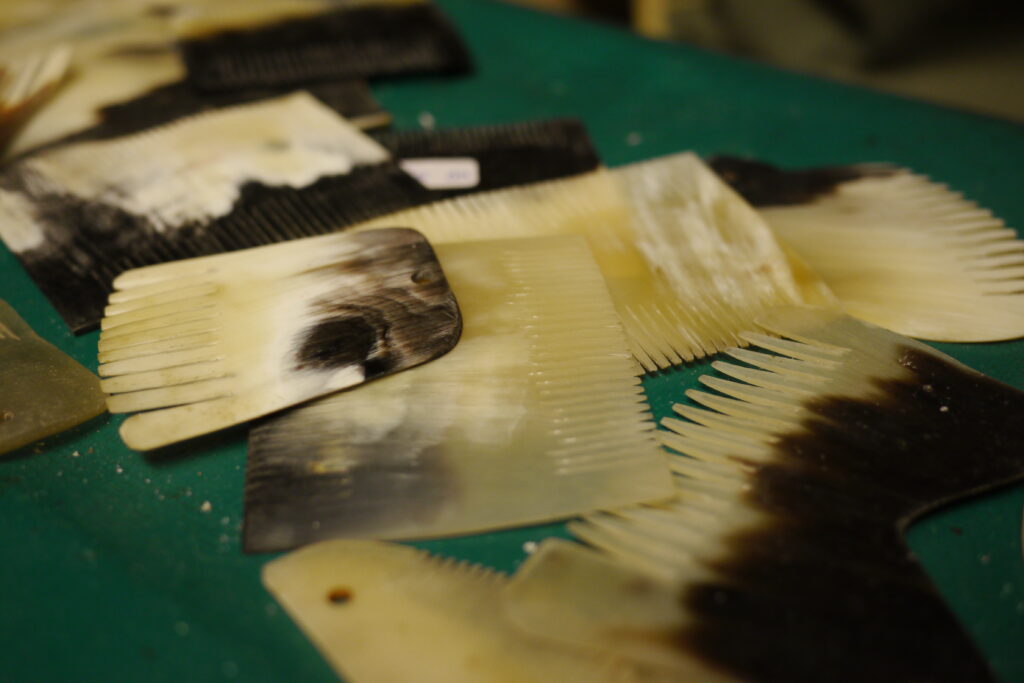 A word of warning: you would definitely need to declare this animal product at customs on your way back into Australia.

Our last stop is a visit to the traditional crafts school where we spoke with a young student copper craftsman, 17-year-old Mohammed Arseb. He is working towards his diploma in one of the artisan workshops that form part of a training school designed to be all-inclusive and gender equal. Obviously he doesn’t have the years of training of our other recommended artisans. At the same time you can be confident in the quality and pricing of this crafts school. (It also has the imprimateur of the King of Morocco and Prince Charles has also toured its facilities).

Mohammed  says, “Coppersmithing is one of the oldest crafts known to Fez. I have these small lamps in my house – they are so pretty at night, lit up.” He says confidently that, “My training means I’ll be able to make very elaborate pieces, and with my skill set of cutting, etching, soldering and assembling, I will be capable of making anything, from small lamps to chandeliers.”

As a visitor you are welcome to walk around the centre and into the different craft workshops. 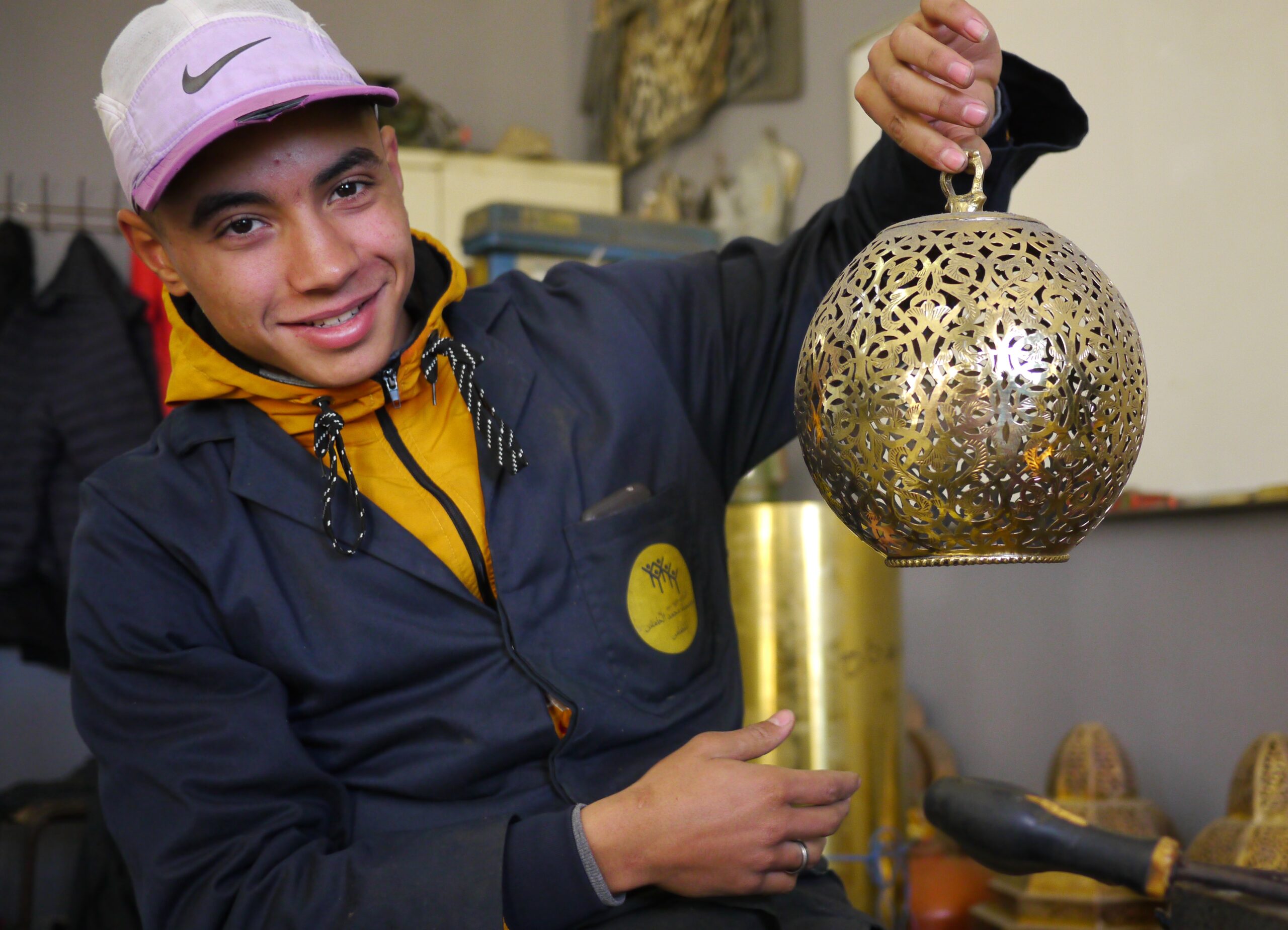 Student coppersmith says, “You can see the human hand in the small cut-out pieces, and also in the etched line that a machine can’t achieve.”

Contact us at Aussies in Morocco Tours™ if you’d like to incorporate an artisan tour as part of your journey through fascinating Morocco. Or even if only one or two of these artisans are of particular interest to you, because, as we said earlier, we have facts sheets about each of them and their locations for those of you who book with us, available via our Client Resources page.