Morocco – Follow in the Footsteps of Great Artists Delacroix, Matisse and Dali: Part 1 of 3

The Morocco of today truly is much the same Morocco sketched and painted by Delacroix, Matisse and Dali on their journeys to and in this land. When you first experience the Marrakech medina, you honestly feel as though you have travelled back in time 1000 years. Yes, you see motorbikes, but you also see men in comfortable hooded djellabas leading their donkeys and talking on their iphones. There are also water carriers, snake charmers, people selling bunches of rosemary and  almost every local is dressed much the same as people dressed in medieval times. You walk past artisans hand-painting their wood or carving intricate calligraphy into it, see apothecaries with unidentifiable concoctions in bottles, plus lamps, ceramics and leathergoods for sale abound.  Butchers, with camel heads on hooks and flies buzzing around piles of meat displayed on their small counters, are chatting enthusiastically with customers. People are drinking mint tea and offering you a glass of it as you walk by.  In small alleyways you might wander past doors to the communal hammam where sits a large lady with missing teeth, her hair covered and a welcoming smile. Then you arrive at your secluded palm-fringed riad, a small oasis away from the bustle of the medina. You gratefully ready yourself to have a cool drink or a Moroccan mint tea and sweets by the pool in the inner courtyard that is decorated with beautiful mosaics. French, Arabic and Amazigh are usually spoken by your hosts, however we at Aussies In Morocco Tours™ select riads for you where English is spoken too.

In a nutshell: What is this blog post about?

In this blog post we talk a little about the artists Delacroix and Matisse, their Moroccan journeys, their art, and how with a little guidance from Aussies In Morocco Tours™ you too can still observe and experience the same.

Eugène Delacroix visited Morocco from January to June in 1832 as part of a French diplomatic mission. Like many European artists of the time, he was fascinated by the exotic and so had jumped at the chance. 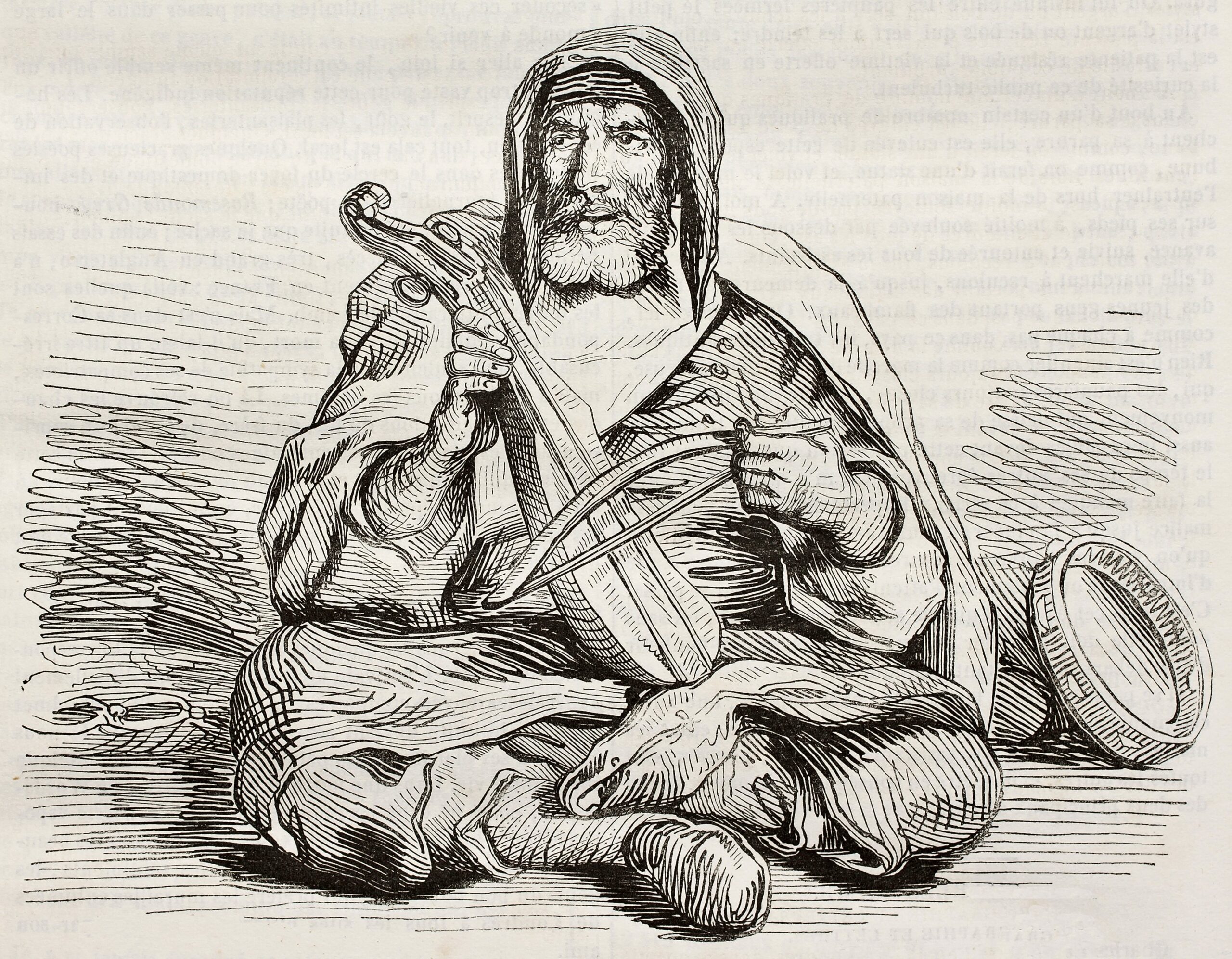 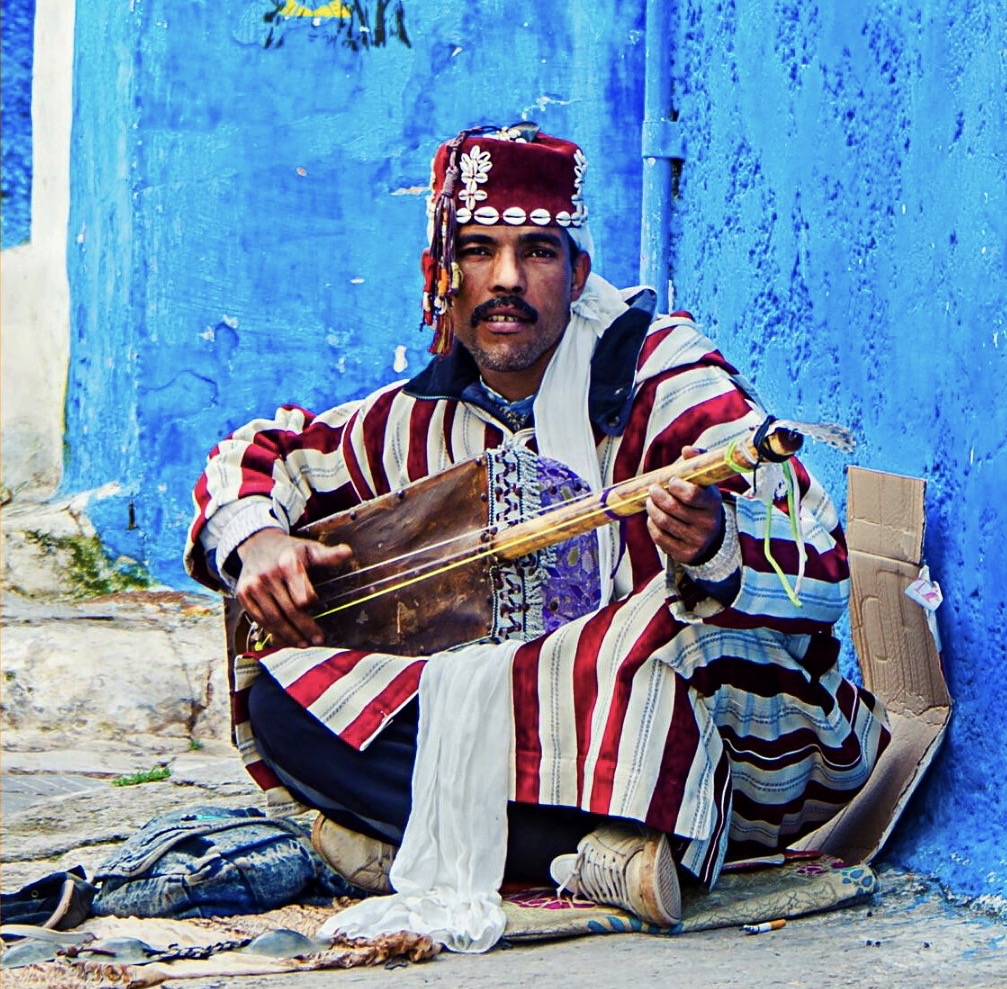 Musician in Chefchaouen. A small group of them will sometimes wander past your restaurant table. It is customary for them to stop to play for you in return for a few coins.
©Maevanwy McAvoy

.It was a turning point in his artistic career.

“The Greeks and Romans are here at my door” he said, “in the Arabs who wrap themselves in a white blanket and look like Cato or Brutus.”

He was also enchanted with the women, their intricate jewellery, artfully knotted scarves and air of mystery. Many of his sketches are of the Moroccan people in everyday scenes.

Delacroix, as many readers would know, was also a leading member of the Orientalist school, depicting the luxury and exoticism of the East as observed or imagined by artists. Their paintings are replete with harem and hamman scenes. Delacroix himself visited a harem in Algeria on the way back to France from Morocco (via Spain too) and painted what is now a famous painting of it called Femmes d’Alger dans leur appartement (Women of Algiers in their Apartment).

Aussies In Morocco Tours™ can arrange for you to experience a traditional Hammam (see our blog post “More Depth, Less Surface Part 1” about this experience in the town of Goulmima – truly unforgettable to actually spend 3 hours living inside a poor Man’s Delacroix, which is what a Moroccan village hammam is) Or if a more western style is more desirable one for reasons of modesty and standard of luxury, our riads will happily oblige. In addition, to see harem rooms, we can arrange a visit to The Palace Bahia in Marrakech, a popular tourist site.

Matisse: “What I dream of is an art of balance, of purity and serenity …. something like a comfortable armchair on a tired businessman.”

Henri Matisse was a French draughtsman, print maker and sculptor.  He visited Tangier in 1912 and again in 1913. He was also known to have visited Marrakech. His Moroccan experience was later regarded as the hinge between his earlier fauvist style and more original, powerful later work which focused on colour as pure expressiveness. He painted Moroccans in their colourful traditional outfits going about their daily life and routines just as Delacroix had done before him – sights from a window, café terraces, mosque minarets, empty squares in midday heat and much more.  Unlike the Orientalists though, of whom Delacroix had been part, Matisse didn’t want to depict fantasist scenes of nude women offering themselves to Arabian men, grandiose salons and traditional baths. 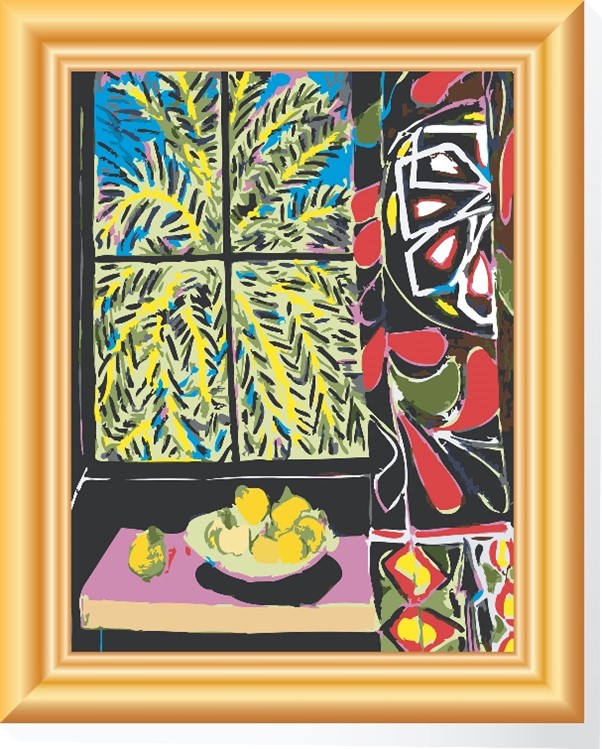 Matisse painted many window scenes including this one from 1948 on the French Riviera. The palm tree here is a like a burst of energy exploding from the darkened interior. He also painted similarly whilst in Tangier. The decorative elements of this painting are reminiscent of Moroccan carpets, mosaics and artisanally painted wood items for sale in the ancient medinas that we will take you to see. 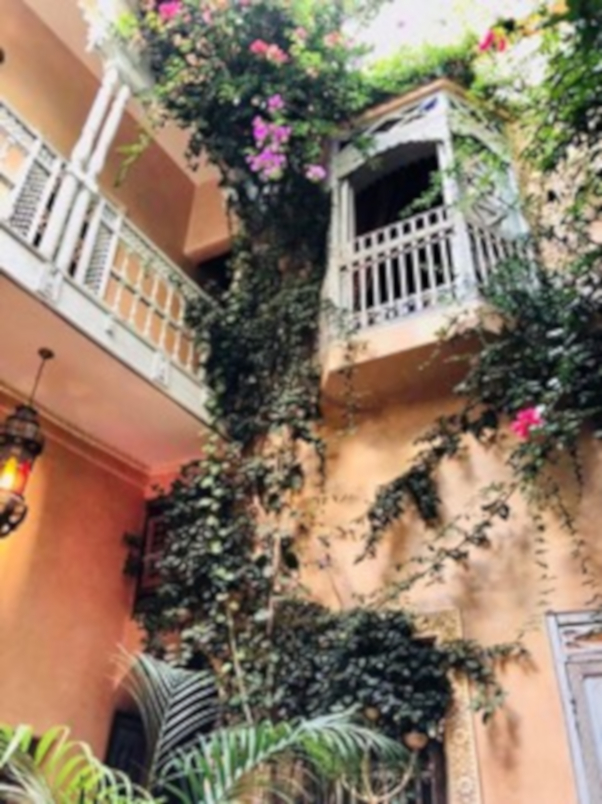 Looking at a window from the opposite direction to the internal view of the Matisse painting, depicted in this blog post. This photograph is taken at Riad Armelle Marrakech. (Image provided by one of our clients). You wonder about who has looked out this window over the centuries.

Matisse paintings of Morocco are bathed for the most part in a dusty, hazy light composed of pinks and yellows and soft blues and greens. Scenes he painted from windows of his hotel room in Tangier, and of subsequent window views that were informed by his Moroccan experience, are more vibrant.

His Moroccan experiences clearly remained vividly with him for the rest of his life as his depictions of Nice during the 1920s with odalisques, carpets and wallpaper is to see Morocco transplanted to the French Riviera (or Côte D’Azur in French).  Even his nudes reflected the Moroccan influence as did his ongoing focus on foliage, building design, design textiles and the quality of light.

You too can see the kinds of scenes that inspired Matisse and look out a riad window as Matisse looked out of his. You can also visit the Berber museum associated with the Majorelle Gardens in Marrakech to observe the traditional clothes and jewellery of the people depicted in his paintings. Maybe you’d enjoy a coffee at the Dar el Bacha coffee house located in a renovated palace in the Marrakech Medina, or a meal – perhaps Friday couscous – with a local desert family in a traditional mud-brick house. Aussies In Morocco Tours™ can arrange that too. You could even share a meal with your driver’s family if you like!

If you, like us, are mad keen on Matisse, why not come to Morocco via the Côte D’Azur and include a visit to the Matisse museum at Nice and to the Chapel he decorated at St Paul de Vence. The Riviera is full of the architecture and the light he painted!

Next, explore Morocco’s influence on the work of Salvador Dali in Part 2 of the Follow in the Footsteps of Great Artists blog post. Then check out our Aussies In Morocco Tours™ proposed journey in Part 3 (first leg and second/final leg) and let us know if you’re interested in joining us.

« Morocco – Follow in the Footsteps of Great Artists Delacroix, Matisse and Dali: Part 2 of 3

See -> Slow Down to Explore -> Ask; Lift Your Moroccan Adventure from Bronze Medal to Gold. »