If you are going to be in the Mediterranean, contact us about adding an adventure in Morocco.

This blog post is about some reasons why that is a good idea.

Incidentally, for those of you cruising in the area in the high season of July-August,

check out two group tours we offer in July 2023:

one focusing on the “must sees” of Morocco being Fez and Marrakech here, and

one being a laid-back coastal tour with a few interesting day trips, to see archaeological and natural wonders, that you will find here.

(You can do private tours with us basically anytime). 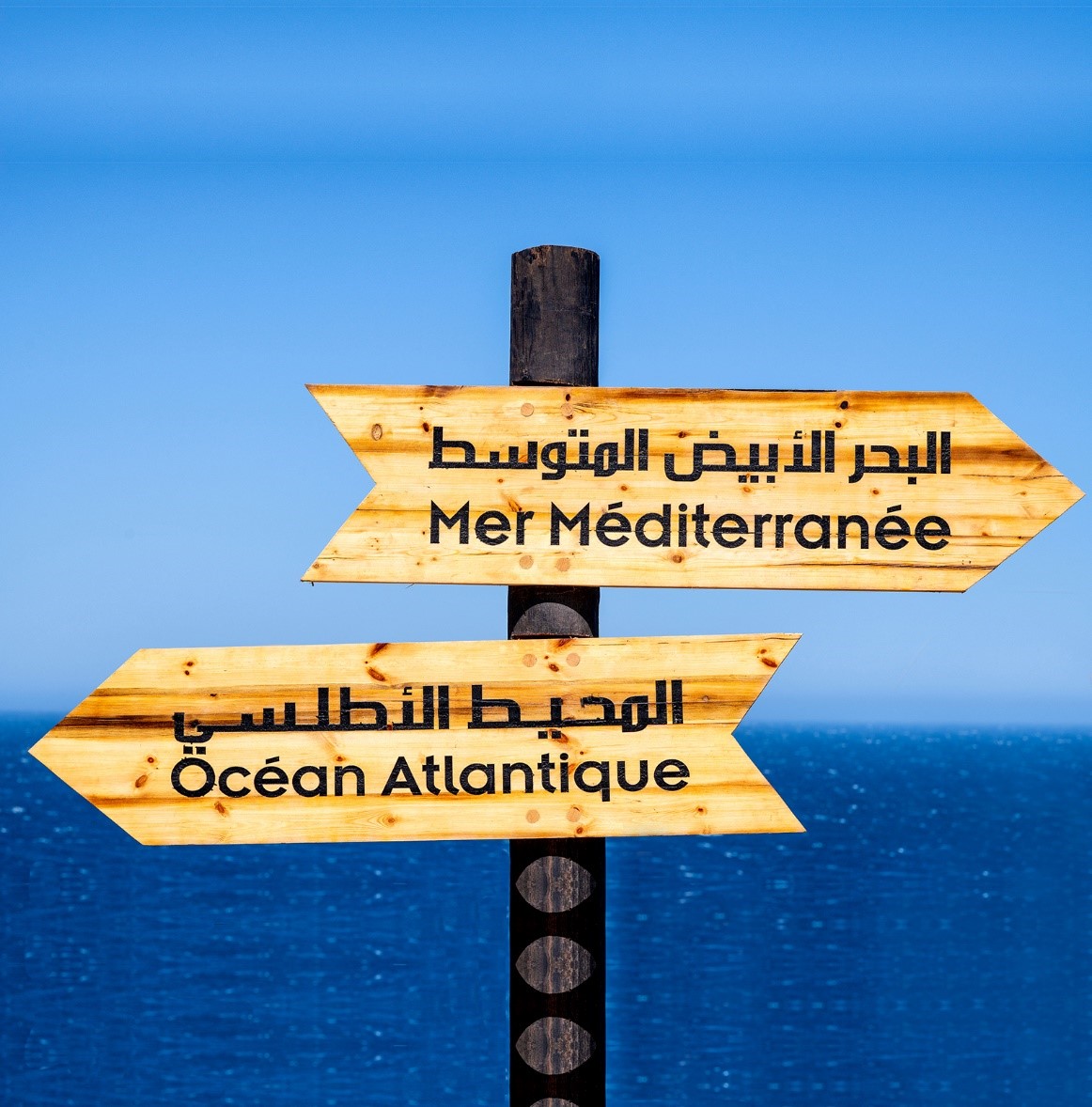 This is a famous signpost in northern Morocco. Just about every Moroccan tourist guide has an image of himself standing next to it!

What many travellers don’t realise is Morocco’s proximity to Europe – sitting on the terrace of the famous Cafe Hafa in Tangier sipping on a mint tea . . . on a clear day you can see the coastline of Spain within tantalising touching distance. An easy 40-minute ferry trip, and you can cross continents – from mint tea to tapas in less than an hour! It is this proximity that has made for connection across history and leaves cultural crossovers and references that link rather than differences that divide, provided you just know where to look on your travels.
If you are planning a cruise that includes some leisurely island hopping in the Mediterranean with your sights firmly focussed on places like Malta and Sicily, Sardinia, and Corsica, consider taking a step further and follow in the mythical footsteps of Hercules by including Morocco on your itinerary. You might find more similarities and synergy between the islands anchored off the coast of Europe and their North African neighbours than you anticipate. 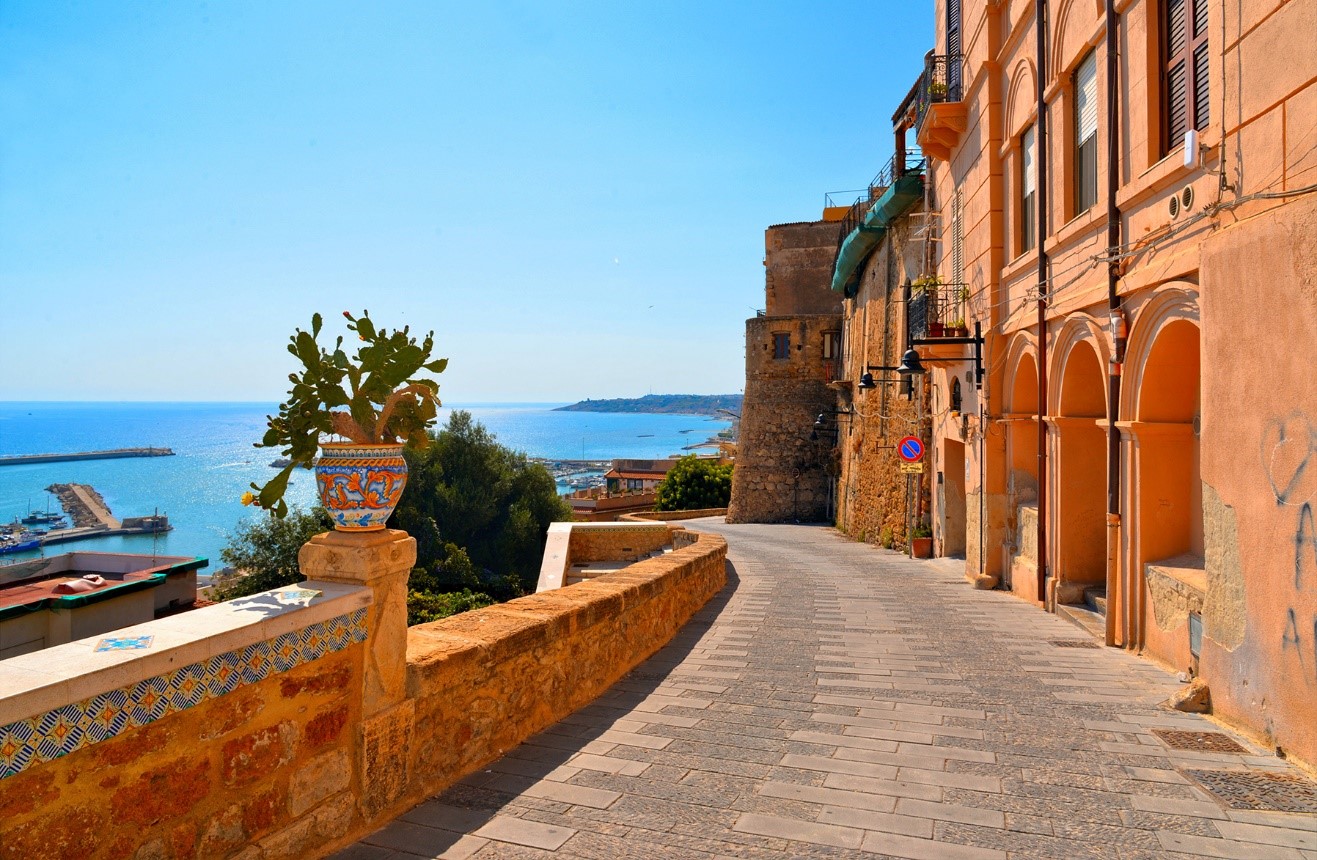 A view of the Mediterranean Sea from Agrigento, Sicily.

And if we take a deep dive and focus in on the case of Sicily and Morocco specifically, it is indeed all about the couscous…
The most obvious thread that binds these two destinations are the food and flavours, with couscous, so closely associated with Morocco, being a surprising Sicilian favourite that illustrates the point. So much so, that in one part of the island, every year in September a festival celebrating the ‘Couscous alla Trapanese’ – generally known as Sicilian couscous – attracts thousands of locals, tourists, cooks and chefs from the region, all competing for the title of the couscous champion. No doubt any Moroccan would dispute that there could be a couscous champion beyond the borders of Morocco. That is a debate best left for another day!
Looking beyond the couscous, the flavours of these two countries are a clear illustration of the historical links that linger and cross. The Arabic influence added almonds, artichokes, cinnamon, oranges, pistachio, and watermelon to the local Sicilian palate. Along with savoury flavours, it is the sweets that are of obvious Arab extraction, with sorbets and granitas amongst some of the treats on the island claiming Arabic roots. 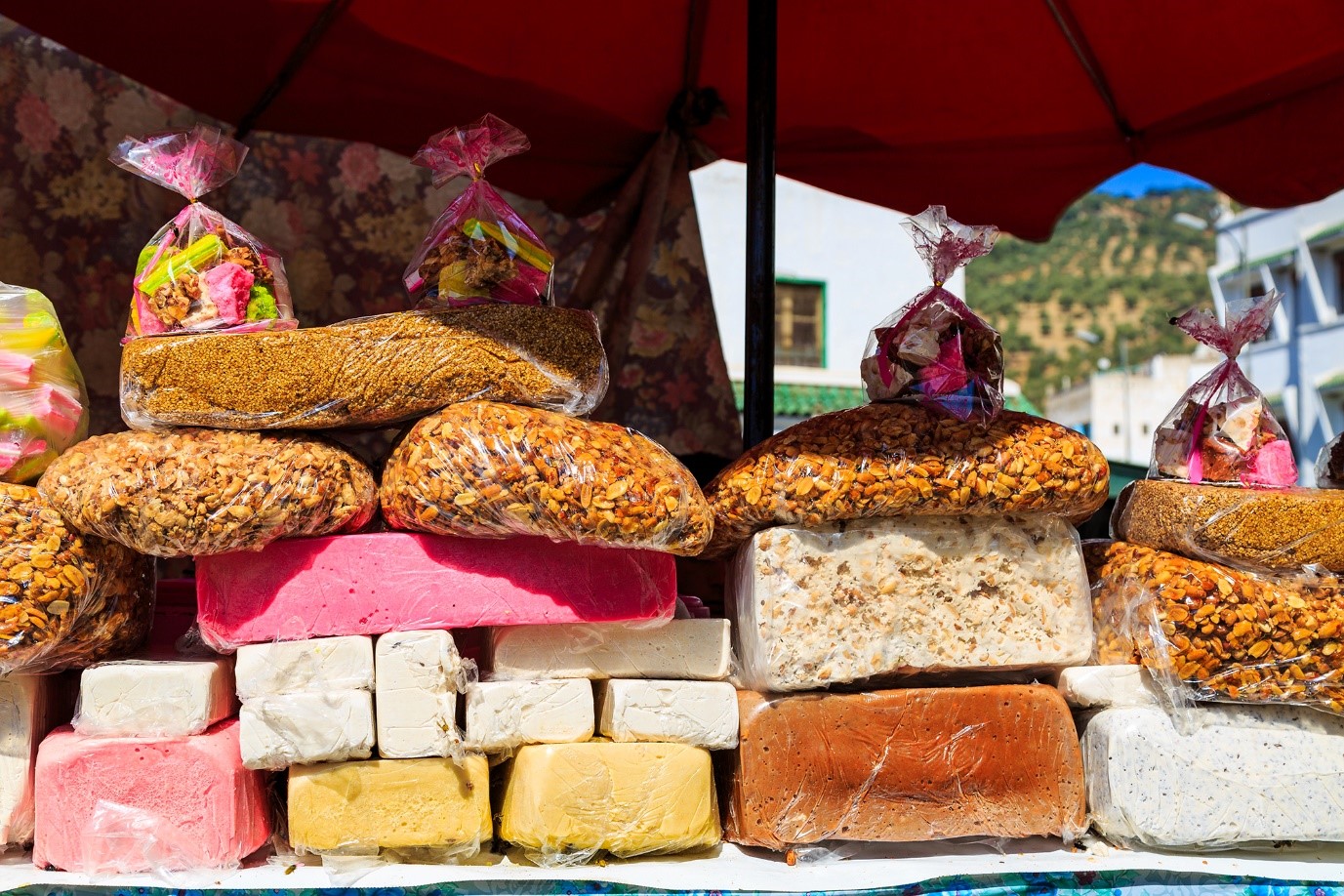 Sweets for sale in Essaouira, a coastal town in Morocco, including nougat and sugared nuts

Understanding the history explains the present, and this is particularly pertinent when exploring Moroccan and Sicilian culture. Without going down the rabbit hole of historical detail, Sicily was under Arab rule for two and a half centuries, at a time which has been referred to as a golden age in both Islamic and Sephardic Jewish culture across Europe. As a result, Arabic customs are or were woven into the fabric of Sicilian life. 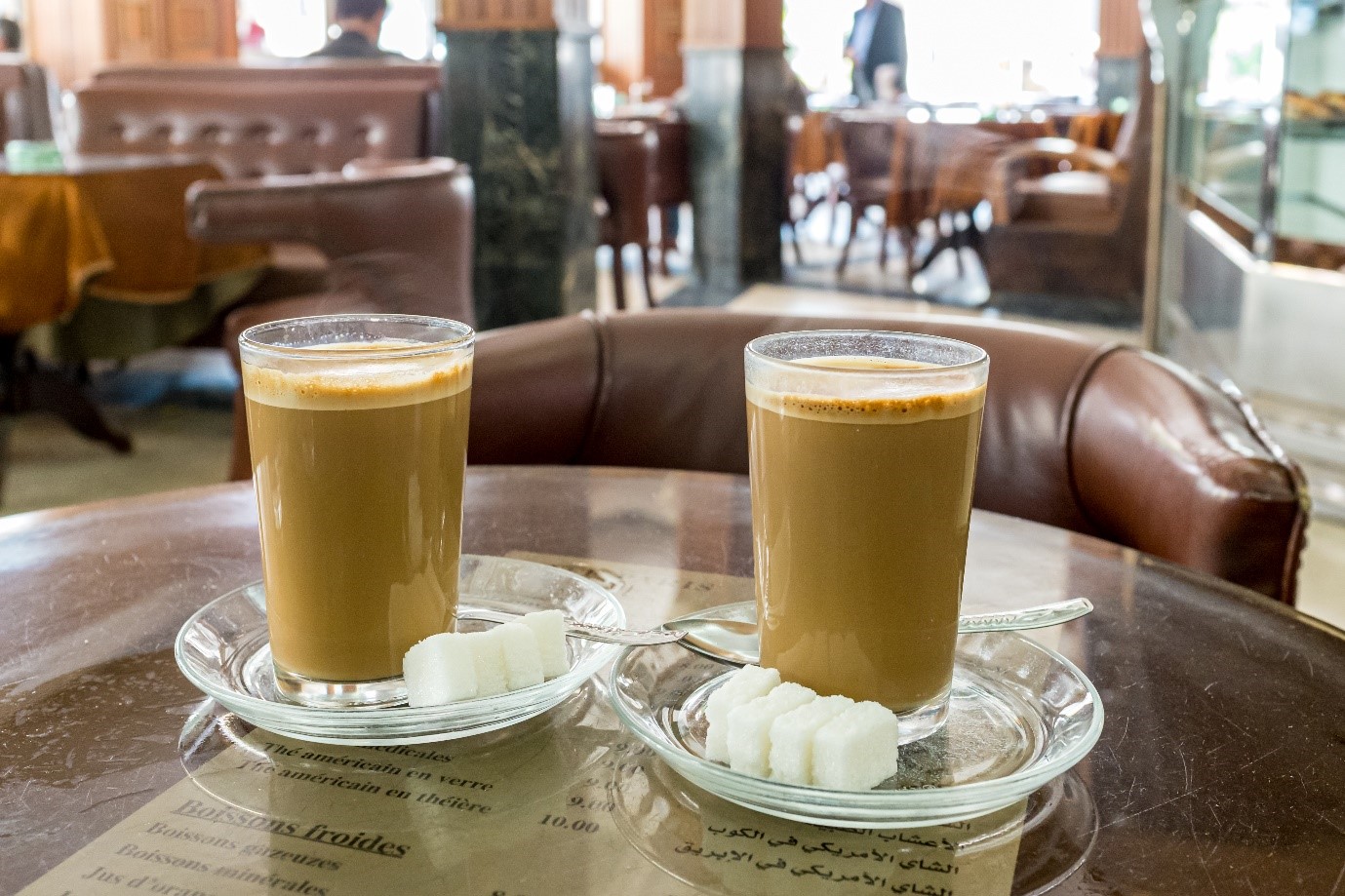 The Arab custom of coffee houses being frequented almost exclusively by men (and these days, tourists of both genders!) is also in evidence in Sicily, although waning there. This image is from a cafe in Morocco.

While under Arab rule and due to its location, Sicily became an important commercial hub and port, and like so many ports, a melting pot of cultures and flavours. The historical connections continue to show themselves in Sicilian life today, and it is these connecting threads that make Sicily and Morocco a fascinating partnership on any itinerary. Taking time to discover Sicily’s enduring Arabic heritage can only enrich your journey. 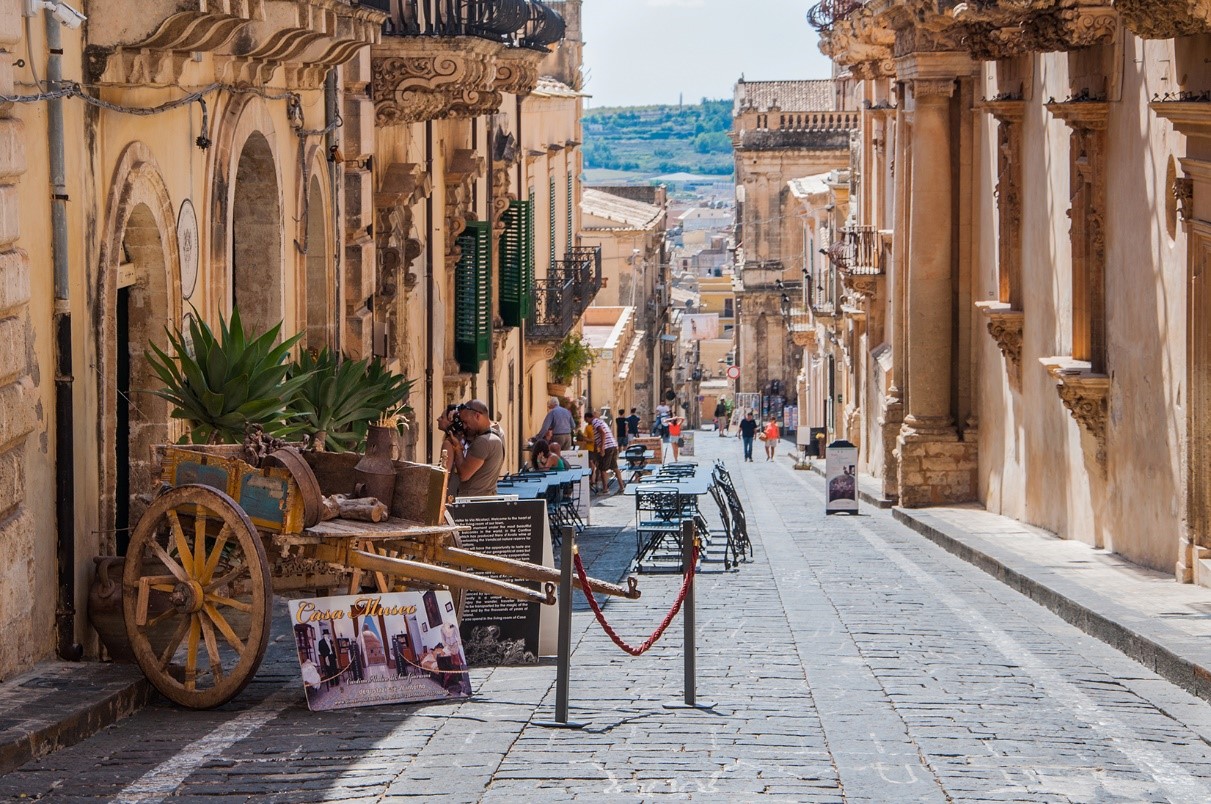 This is Noto in Sicily, near Bari port, where the Arab Emirate made its final stand before being hounded out by the Norman conquest of the Island. The dominance here of Baroque rather than Moorish architecture, may well be due to the earthquake that rocked Eastern Sicily in  or around 1600AD.

Wherever you go in Sicily, you will come across towns and villages bearing names of Arabic origin, with the most obvious being Marsala, or Mars’Allah, which means God’s Port. Arabic names are not uncommon, with the local dialect also having its fair share of words with Arabic roots. 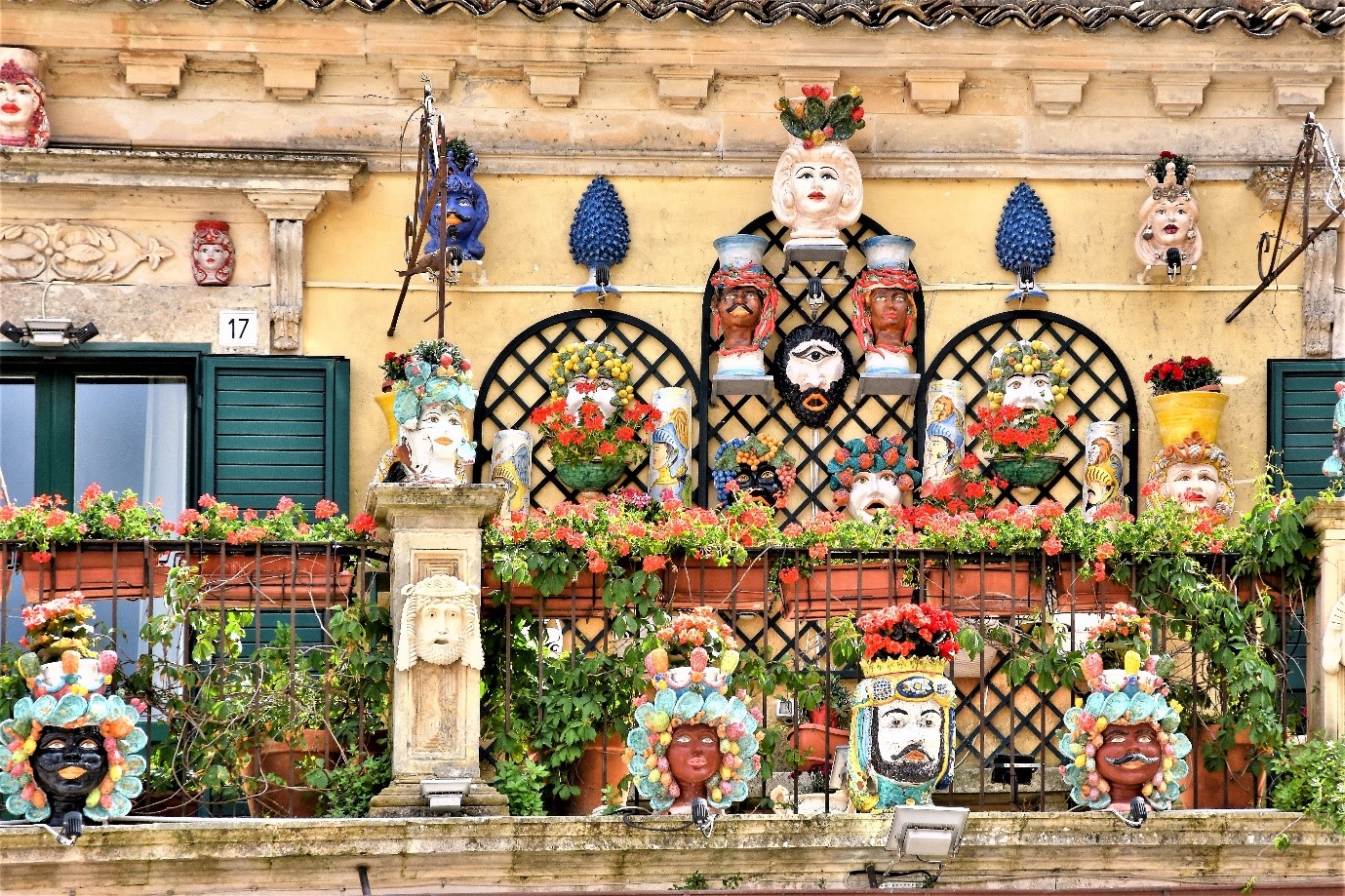 The flowerpot “heads” of Sicily reflect its history of various invaders and probably harks back to a more violent time when the heads of the vanquished were displayed for the populace to understand who were the new overlords. Spot the Arab-inspired ones!

The market culture in Sicily does still have a souk-like feel, especially those like the Capo and the Ballarò in Palermo. If you have spent time in the souks and markets of Morocco, wandering around Sicily, you should feel right at home. With a history that is about a synthesis of Arabic and Italian culture, it is inevitable that these links remain visible. All of these cross-cultural indicators make walking through a town like Marsala, Trapani, or even Palermo, the island’s capital, feel more like wandering through a North African medina than an Italian island town. On the other side of the sea, a stroll along the Tangier corniche has a decidedly Mediterranean feel to it, with a broad boulevard and the crumbling facades of its checkered colonial past. With both pasta and paella not unusual on a Moroccan menu, especially if you are in the north, it is clear that the crossover worked both ways! 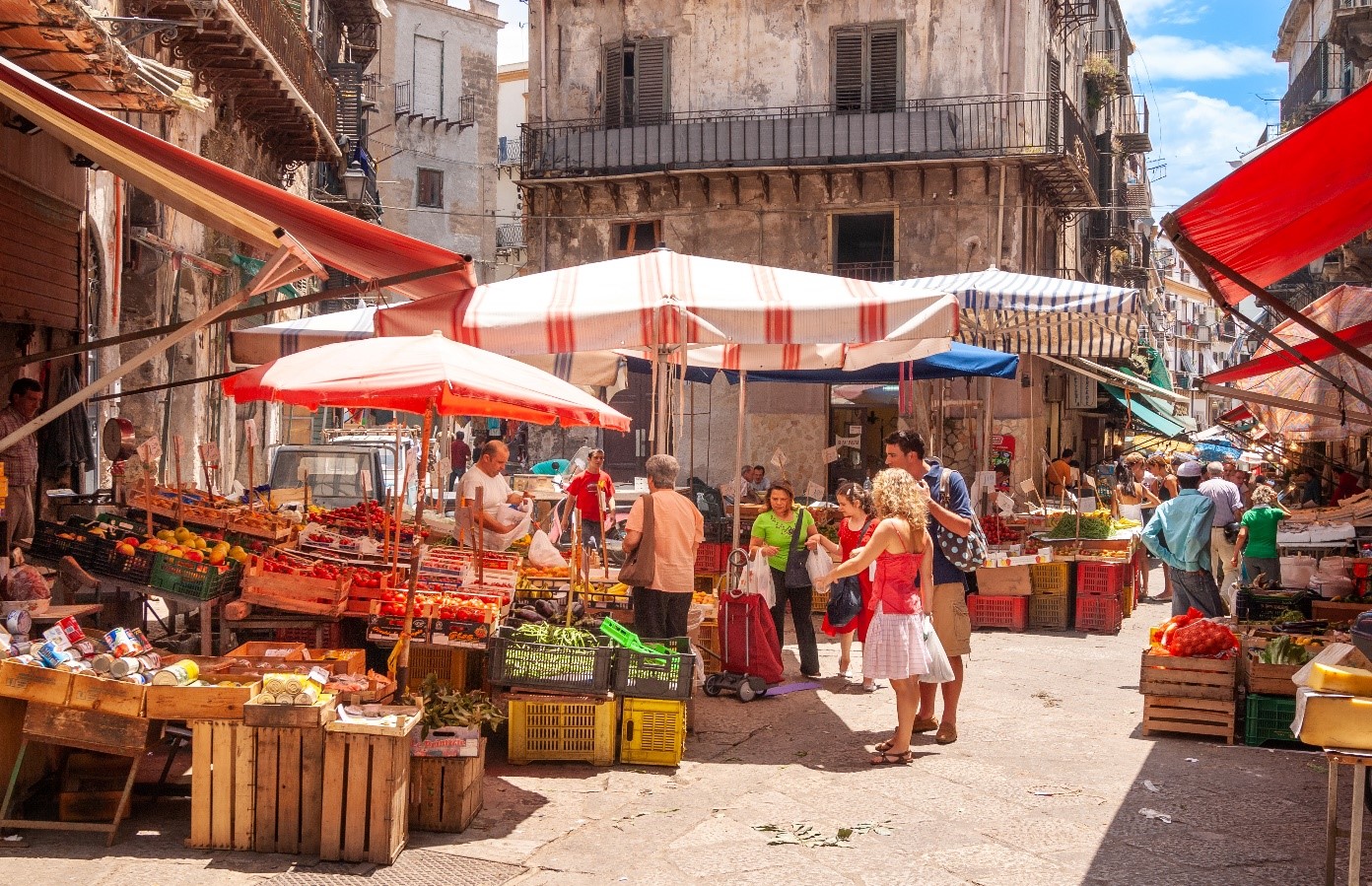 A market in Catania, in Eastern Sicily is very reminiscent of local markets all over Morocco. Like Sicily of old, in Morocco the practice of daily food purchases and slow cooking from scratch, is commonplace.

Not many buildings have remained in Sicily from Arabic times with the exception of the baths at Cefalà Diana built in the 10th century, just south of Palermo. The exterior of Palermo’s cathedral, for a time converted into a mosque, bears some Arabic inscriptions along with some examples of Islamic art and decoration. If you know where to look, the Islamic influence in Sicily is a constant undercurrent rather than a grand gesture.

Having referenced Hercules earlier, while he might not have been “doing the Med” on a cruise ship or been able to make use of TripAdvisor to decide on an itinerary, Hercules did manage to fit in an awful lot. Both Morocco and Sicily were en-route as he worked through those laborious tasks given to him by the gods.
In Morocco, Hercules is credited with having broken into two a mountain at the entrance of the Mediterranean (the Strait of Gibraltar) to form the Pillars of Hercules. While in Morocco, myth has it that he slept in a cave – the Cave of Hercules in Tangier – before completing his final and 12th labour which involved some golden apples from the Hesperides Garden, that, according to some ancient Greek writers, was located nearby at Lixus. The ruins of Lixus can still be visited today and are not far from the Moroccan seaside town of Larache. Prior to all of Hercules’ Moroccan action, his labours had taken him to Sicily where we are told, he had to save a herd of cattle. While cattle and caves might not be on the bucket list of a 21st century traveller, it is good to know you are following in the footsteps of mythical icons! 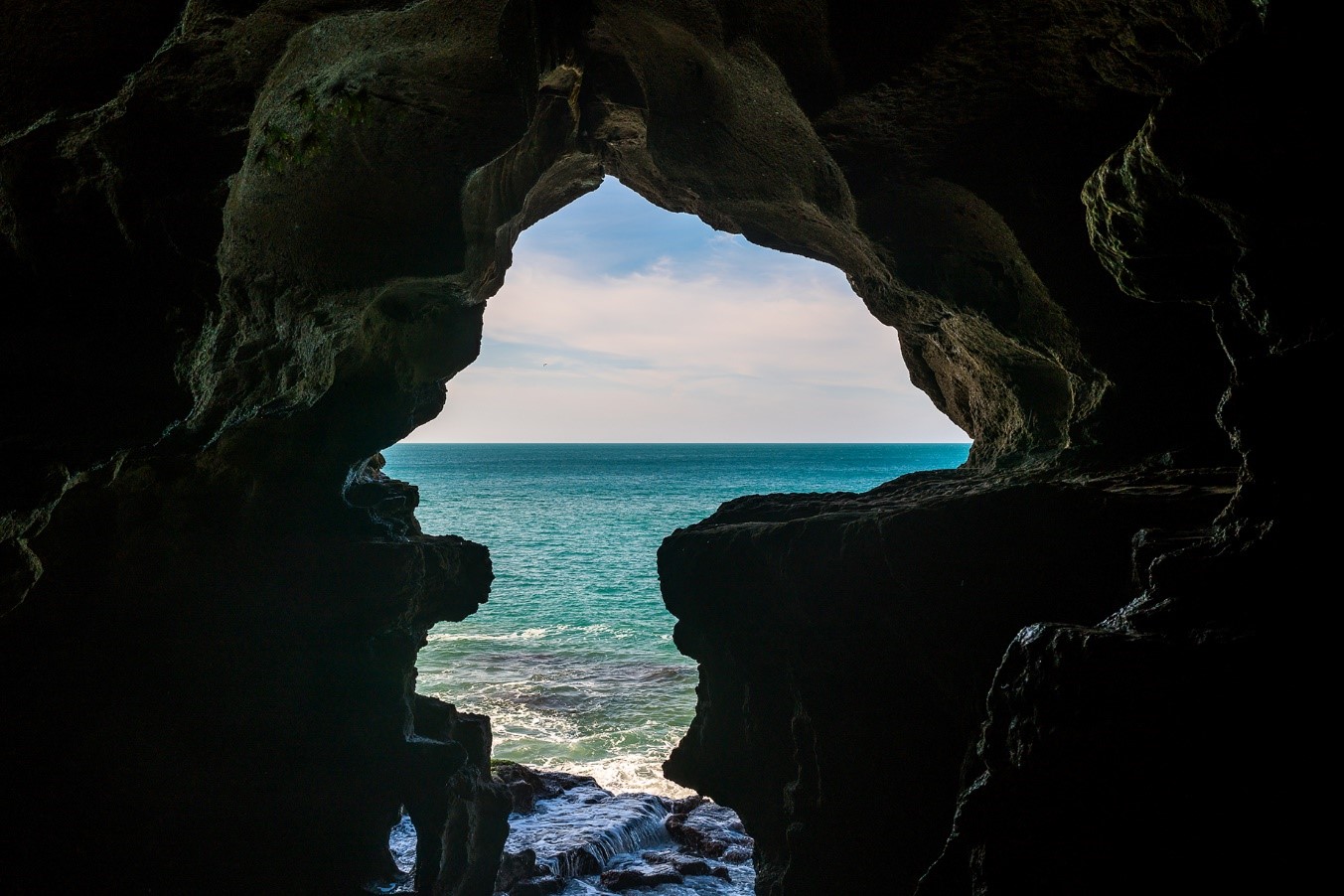 The Cave of Hercules, near Tangier in Morocco, this opening of which looks rather like the outline of the African continent

Not just Sicily and Morocco

In this post we have focussed on Sicily and Morocco, exploring some of the more visible links you might find if you add Morocco to your Mediterranean itinerary.  As you explore the other islands too, you will find a lot of these same reference points and crossover both in the history of these islands and in more contemporary culture, because these islands remain a meeting point and a migratory melting pot.

On a purely practical note, and due to the geographical proximity of Morocco, you can be assured of similar weather conditions so no need to stress about additional wardrobe considerations. Although, with that being said, the fundamental difference between Morocco and an island like Sicily today, is that of religion. While this makes the journey more interesting, it also might mean you need to throw in a scarf if you want to visit certain sites in Morocco. 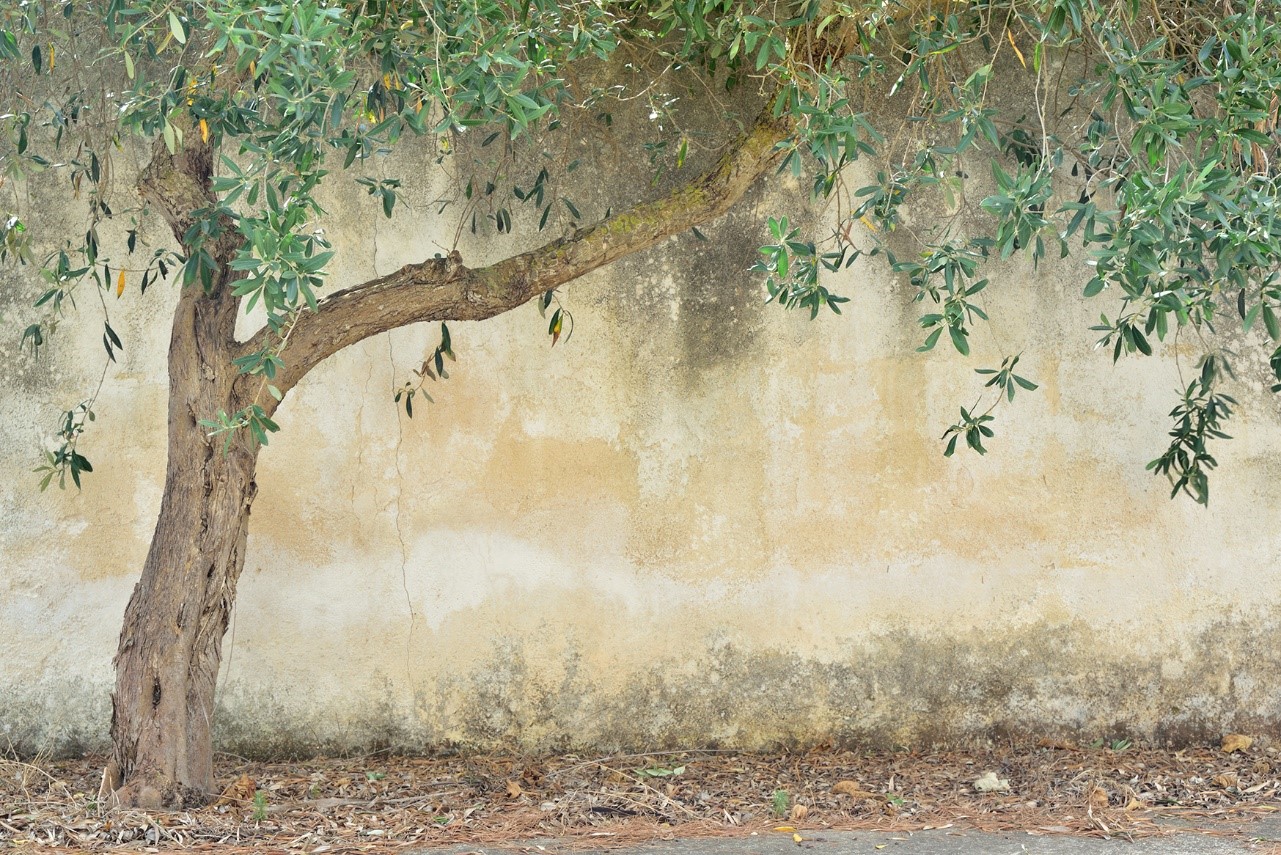 Olive trees are in abundance in this part of the world including in Morocco and Sicily, due in part no doubt to the similarity of the climatic conditions.
The same goes for pomegranates and prickly pear cacti.

Getting there: From Europe there is no shortage of options if you decide to add Morocco into the loop with both major and budget airlines flying from a variety of airports, as well as ferries from France, Italy and Spain. A quick online search will throw up a range of daily flights connecting Sicily and Morocco in under three hours.
So, if you are packed and ready to go sit back and taste the couscous…and let us know which one comes out on top of your itinerary! 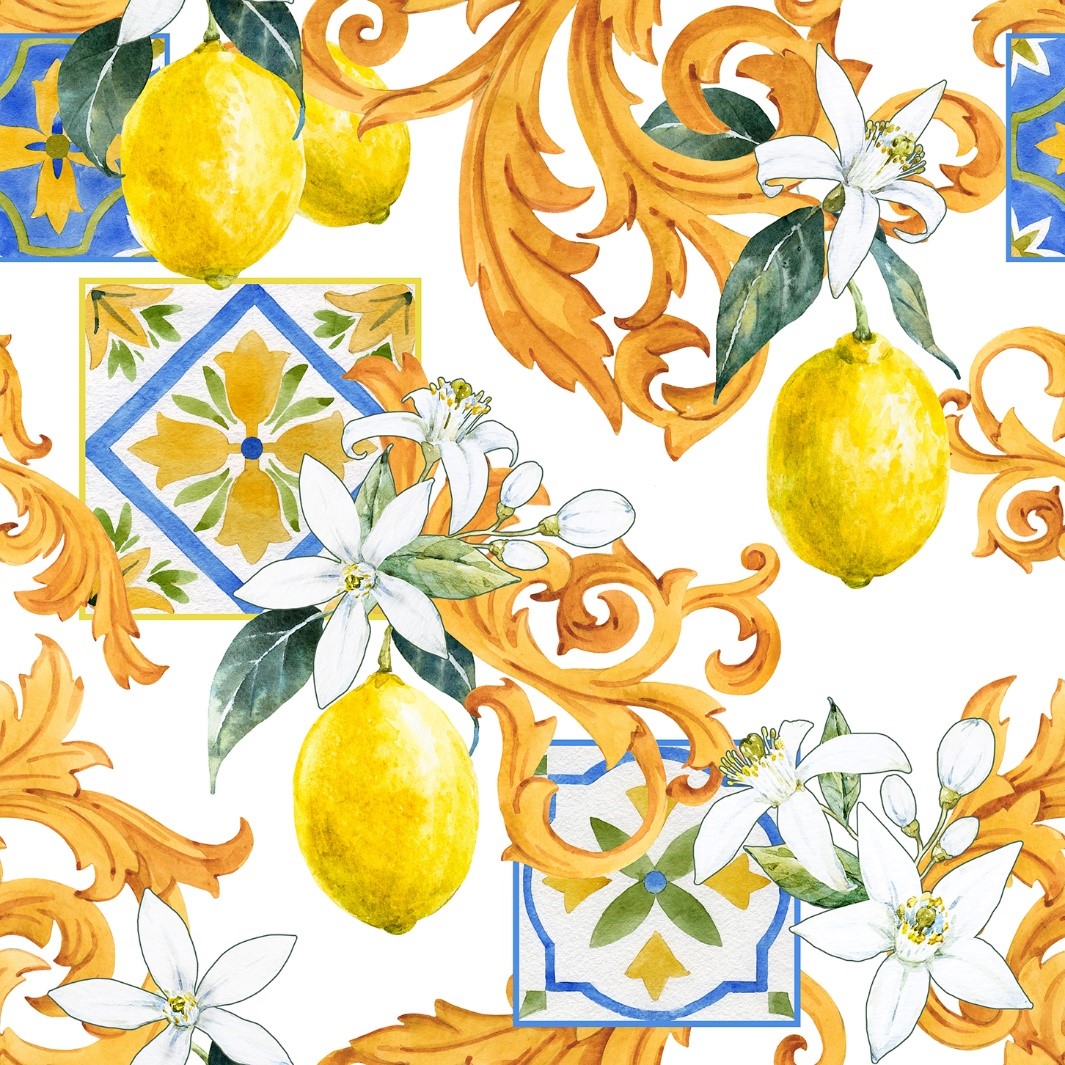 Of course, Mosaics like this Sicilian one, are ubiquitous in all countries of the Mediterranean including Morocco.

← Shipwrecked on Gilligan’s Island, and other safety scenarios
DISAPPEARING MOROCCO – discover Morocco beyond the guidebook as we dig a little deeper into its cultures and traditions on a tour that does – from time to time - go a little off-piste to ensure you get to taste the tagine and rock the kasbah… →
Aussies in Morocco Tours