Visiting Both Spain AND Morocco – It’s Easier Than you Think and Makes a Lot of Sense!

If your travel plans have you visiting the Iberian Peninsula, we suggest adding some time in Morocco as well. Visiting Spain and Morocco together may sound daunting but it’s actually a lot easier than you may think. There are good reasons to visit both countries together – the shared history being just one of many.

While many people decide to make a day trip to Morocco from Spain, this is merely dipping a toe in the fountain. Instead, make it at least a week to enjoy a true experience and the chance to connect the two cultures. If you can make your time in Morocco longer, you won’t be disappointed.

Getting from Spain to Morocco has never been easier than it is today. Yes, the very popular ferry from several cities in Spain to Tangier that operates multiple times a day remains available for those who choose this route. However, if you’re in another part of Spain, say Barcelona or Madrid, making the trip to the far south just to catch the ferry adds on a lot of unnecessary travel time.

Thanks to many inexpensive flights between the two countries, you can often spend under $A100 to fly to Morocco. Major carriers like Iberia have several routes, however low-cost carriers like EasyJet, Ryanair, Air Arabia, and Vueling also operate routes to Morocco daily. (Although please be aware that with these discount carriers there may not be the same back-up support in the unlikely event that your luggage doesn’t arrive with you. Better yet, carry your luggage on board if you can). The travel time is marginal as well. A flight from Seville to Marrakech is a mere 55 minutes, while Barcelona to Tangier is just under two hours.

Al Andalus and the Moorish Connection

If you’re not already familiar with the history and connection of these two present day countries, let’s take a little walk back in time. There is a tendency to think of Andalusia, the southernmost province of Spain, as just having ties to Morocco. However, much of present day Spain and Portugal was at one time under Moorish control and was Iiterally known as Al Andalus. This period lasted from 711 until 1492.

These years are sometimes known as the Golden Age in Islam, and Al Andalus was one of the greatest economic powers and learning centres of the world. Around the year 1000, the city of Cordoba was considered the most prosperous city in Europe. It’s also argued that the genesis of the Renaissance could be attributed to the scholars who studied in Cordoba.

It makes sense that these two regions are so closely tied together. The end of Al Andalus was in 1492 with the Christian expansion during the Reconquista. Many of the Muslims and Jews who had been living in the Spanish and Portuguese parts of Al Andalus fled to other countries; with Morocco being a recipient of one of largest number from this mass migration. Remnants of the Al Andalus civilization can still be found in cities across the north of Morocco, in the traditional music that has been passed down and in the cuisines enjoyed across the country. 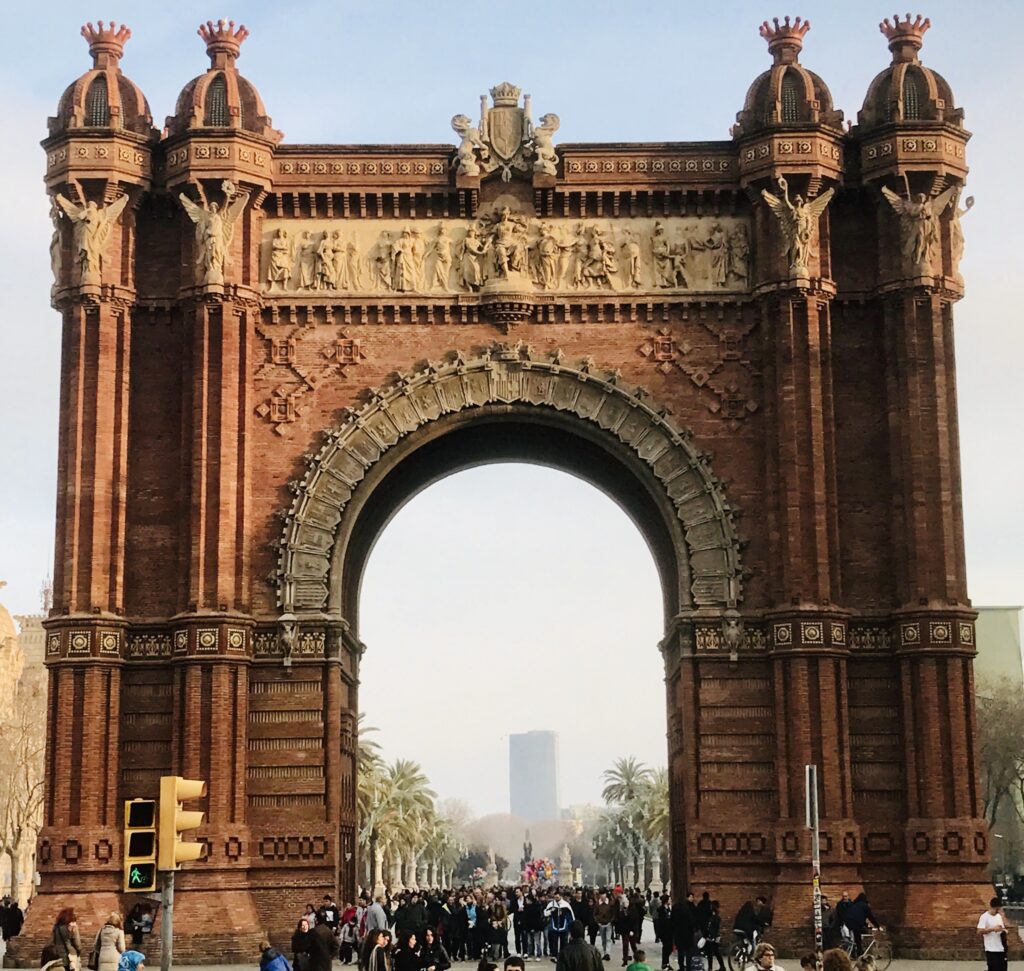 The Arc de Triomf in Barcelona (pictured above) was built in the 19th century in the Neo-Mudéjar or Neo-Moorish style, reflecting the Moorish history of the Iberian Peninsula.

5 Examples Where You Will See Similarities

Of all the sites in Andalusia this is one of the most popular, and most impressive. Inside you will see examples of calligraphy and tile-work very similar to what you will find in places like Morocco’s Ben Youssef Medrassa in Marrakech. It’s also fascinating to see the blending of cultures as the mosque portion remains intact, while inside there remains an operating Catholic Cathedral. 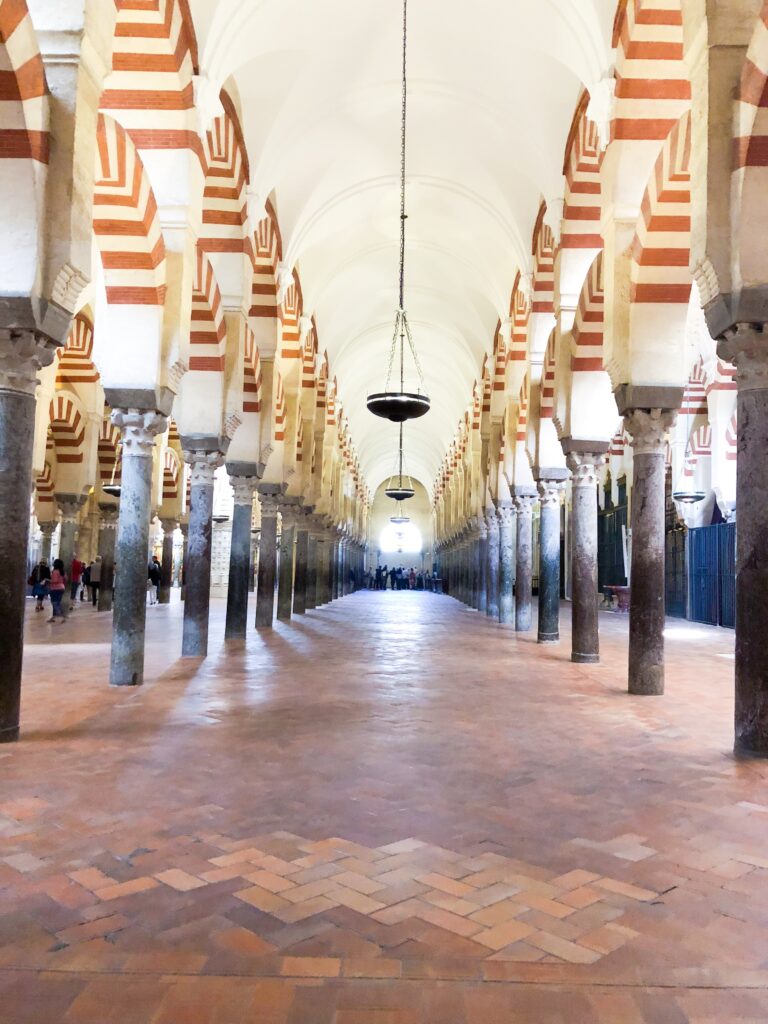 Mezquita in Cordoba (above) was converted into a Christian cathedral in the 13th century.

The giant doors, behind which you will find the bell tower (known as La Giralda), of Spain’s Seville Cathedral bear a striking similarity to doors of Dar al Makhzen in Fez. 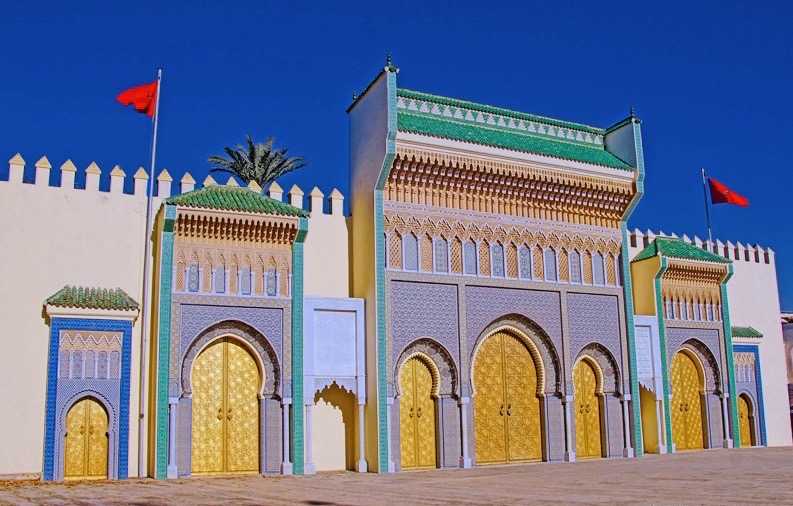 Doors of Dar al Makhzen (© @maevanwys_musings) in Fez (above) – royal palace of the king of Morocco.

The tower in Seville was once a minaret from which the Moslems were called to prayer, and the Seville Cathedral with its bell tower is called “the twin” of Marrakech’s Koutoubia mosque because of the bell tower. In fact the two were said to be the place-markers of where the Almohad dynasty (Islamic revival) began and ended. When Seville was taken back by the Catholic kings, the minaret and mosque in Seville were converted to a bell tower and church instead. 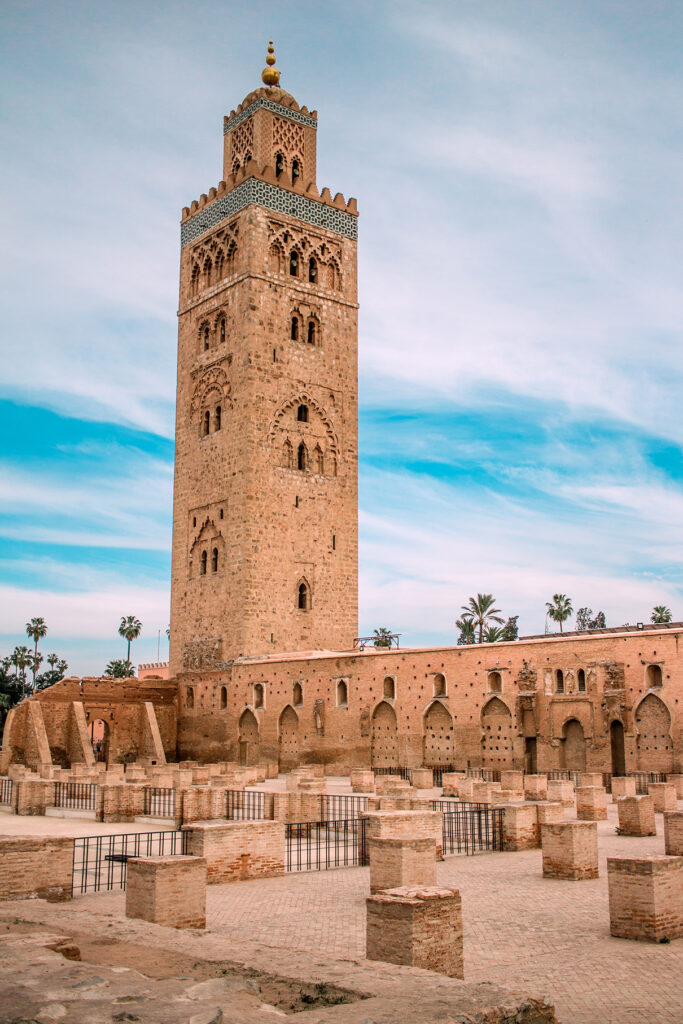 The Koutoubia Mosque (above) is the tallest structure in Marrakech – the minaret is 70 metres high. 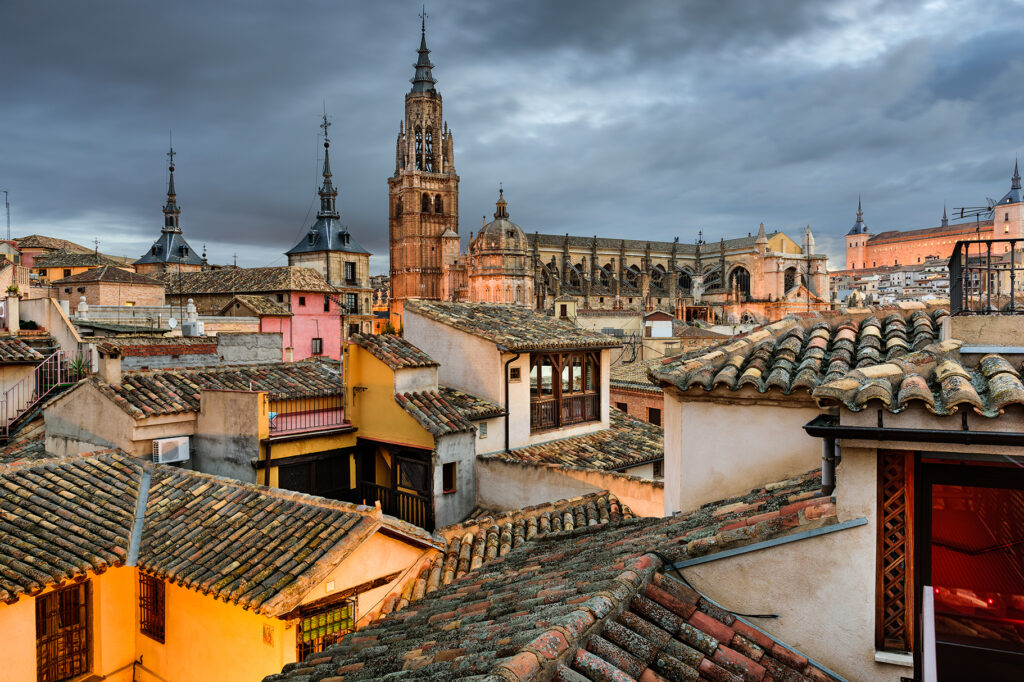 The belltower of the Cathedral of Saint Mary of Toledo in Spain recalls the mosque on those grounds before it.

This palace needs little introduction, and it will be overwhelmingly clear when you visit Morocco that there are discernible similarities in design and style between this building and many in Morocco. If you like the open air patios and palace-like rooms, you’ll love staying in Moroccan riads that are designed much the same way, albeit on a smaller scale.

4 – Eating a B’stilla in Morocco

There are a lot of culinary crossovers between Spain and Morocco, but this one may be the most luscious. Evidence of this recipe was found in a 13th century Hispano-Muslim cookbook. One of the stories behind this pigeon pie (don’t worry today it’s often made with chicken) is that the dish was originally made in the royal kitchens in Spain. There are many other possible suggestions as to where the recipe originated, but one thing is certain, it’s delicious and something you must try in Morocco! 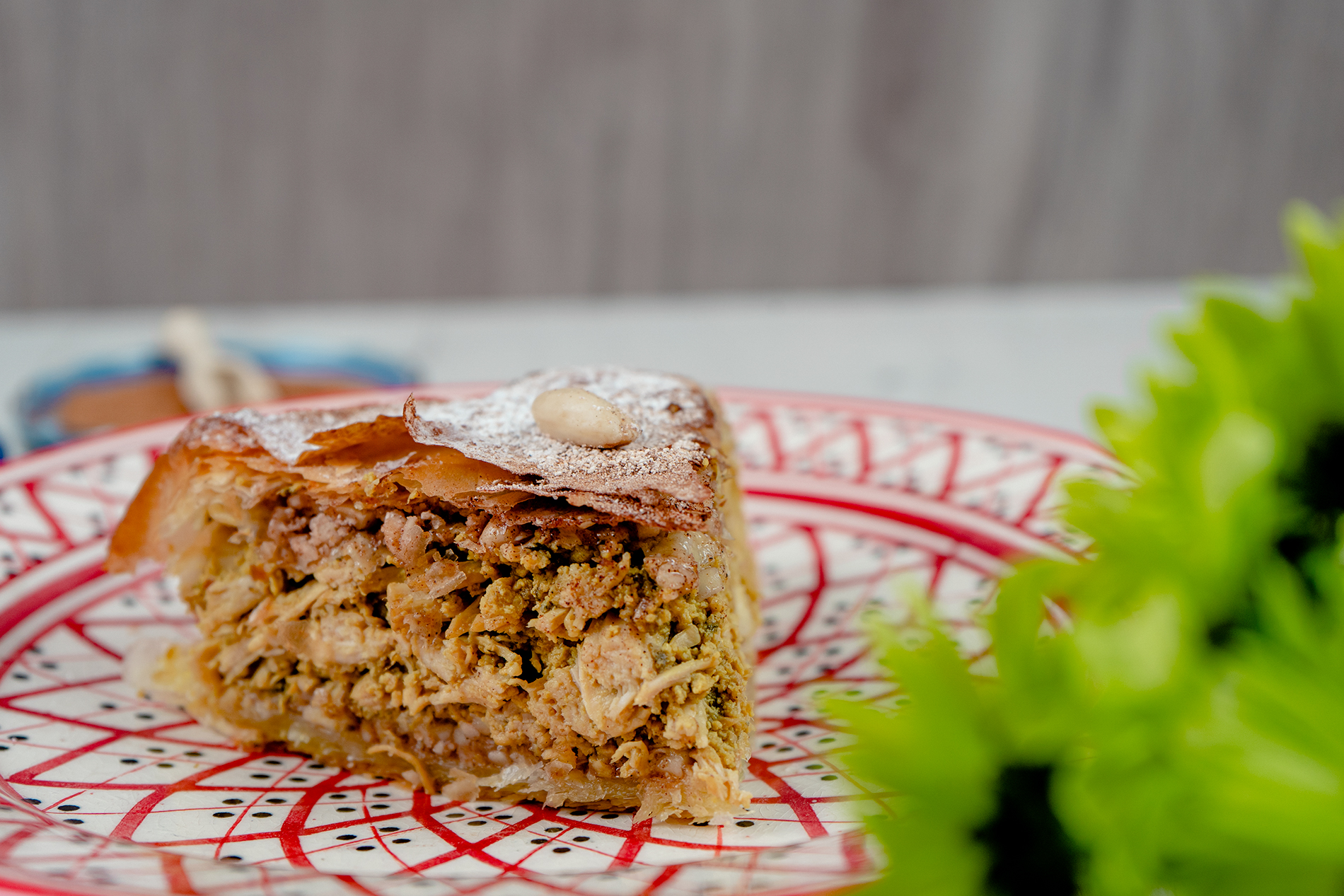 Crispy chicken Bstilla (above) is an unusual combination of sweet and salty flavours.

It’s estimated that eight per cent of the Spanish dictionary is either derived from, or is directly found, in Arabic. The connection is very strong. After Latin, Arabic has had the strongest impact on the Spanish language and likewise in the Moroccan Arabic dialect of Darija, there is a heavy use of Spanish words. In the north of Morocco, you’re far more likely to hear Spanish being spoken than French.

How to Book Your Morocco Trip

Many people decide to tour Spain on their own. It’s fairly easy to navigate, even with different forms of transportation and language barriers. If you decide to combine a Morocco and Spain trip (or indeed a visit to any European country and Morocco; see our other blog post about this here), we think that choosing an Australian travel operator for the Morocco portion of your adventure is a great way to not only experience Morocco with an eye to Australian expectations and desires (whilst retaining the services of trusted locals), but it is also a way to relax and take away some of the common stresses that going-it-alone can create.

While it is a beautiful and enchanting country, Morocco can become overwhelming especially for first-time visitors. Deciding which modes of transportation to use, which cities to visit, where to stay and which are the best eating places is made slightly more difficult in Morocco due to the language barriers, a less robust infrastructure and less regulation in the attitude of locals regarding the tourism industry in general. Off-loading much of the stress, so you just get to enjoy the best parts, is truly the way to go.

Morocco is an amazing country and with the help of Aussies in Morocco Tours™ (check out why us in particular here ) you can be sure that everything is taken care of from start to finish. We can help you make the most of the time you plan to spend in the country, as well as sharing our insights to help create the experience you want.

The question now is, how long can you stay? 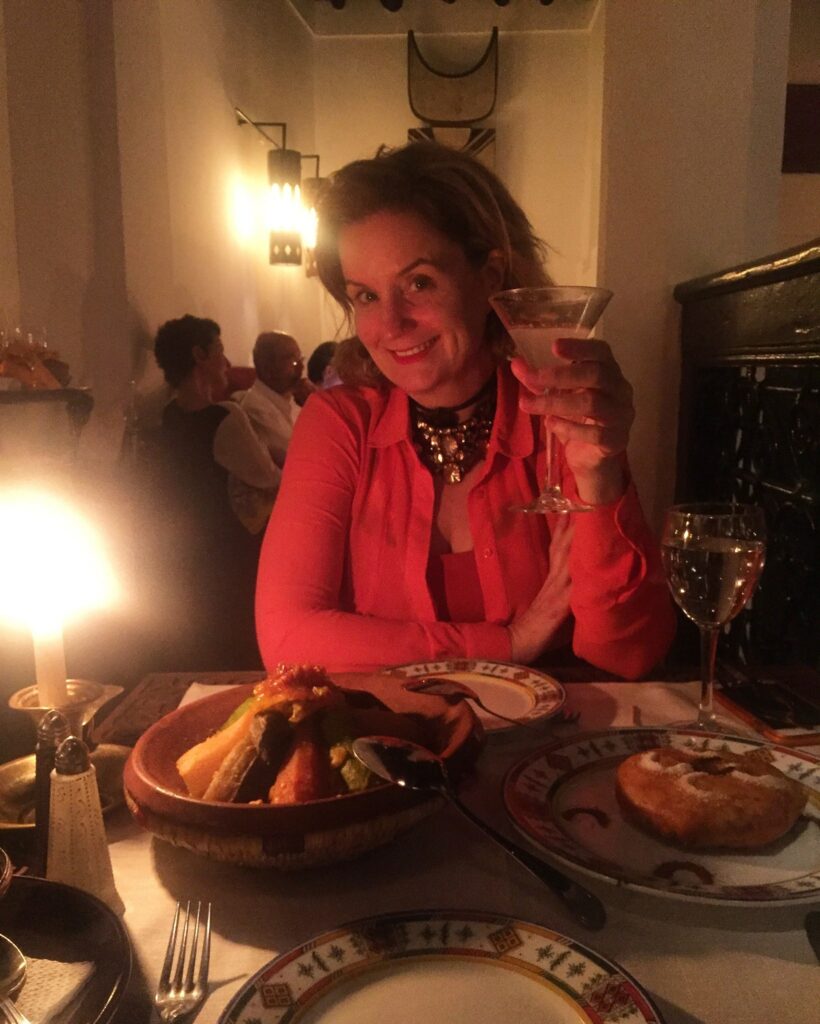 Cara our principal (above), about to drink a Margarita cocktail and eat a tagine dish and a B’stilla (which she can report was delicious), at the Restaurant Le Foundouk in Marrakech (2016).