My driver in Morocco was Lahcen, and a few days earlier when we first arrived in the famous town of Rissani on the edge of the dunes, we visited his mother and siblings. Family is everything in Berber culture, and at this point I’d like to make clear that the Berbers are non-Arabic tribes and that while the word “Berber” is still in common usage, including by the people to whom it refers, they often, although not always, prefer the term “Amazigh”. As a sign of respect, I had knelt in front of Lahcen’s mother as she reclined on a thin mattress on the floor and kissed the back of her outstretched hand, Morocco style, while Lahcen’s young brother Omar poured me some mint tea. I could see his mother had once been a strikingly beautiful woman. Childbirth and a life of humble circumstances had since taken their toll. His adult, unmarried sisters lived at home with his mother, and in the traditional way they did not work outside of it and rarely ventured outside either.  As they spoke a little English with me, I think Lahcen had paid for them to have an education, unlike many of the women in the desert.

Lahcen had lived in Japan for ten years, working as a waiter in an Italian restaurant there, and he spoke both English and Japanese very well. He knew something about the world outside of the desert town of his childhood. He had insight into the concept of cultural differences because of that, and a capacity and willingness to critique the Moroccan situation, although I don’t think he had received formal education beyond highschool. He preferred however to laugh and joke, interspersing this with angry outbursts usually aimed at my perceived transgressions or those of other motorists.  He lived in the moment, Berber style.

Lahcen had married a Japanese woman he had met when he was a 20-year-old camel driver and she was on holidays in Morocco. Koharu managed their tour guide business and, unlike Lahcen’s mother and sisters, she dressed in the western style with no head covering. She also ran their Marrakech riad, or traditional house, with the inner courtyard open to the air. I have learned subsequently that Moroccan men are well known for respecting their wives’ religious and cultural practices and rarely seek to impose their own upon them. Lahcen and Koharu had a small daughter together called Sakina, whom Lahcen clearly absolutely adored. She had her mother’s almond eyes and her father’s desert skin. When I met her she hadn’t started to speak.

During one of our drives through the harsh Moroccan landscape over the Atlas Mountains, I asked Lahcen what he hoped for his daughter. He said he hoped she would speak many languages like him, be strong and have an important job.  While he spoke we passed wild dogs lined up for kilometres along the highway waiting for passersby to throw them morsels. Lahcen liked to tease them cruelly by slowing down, as though about to toss them some food, before speeding away. I asked him if he wanted to “give Sakina religion”. He said “Of course”.

Donkey market, Rissani markets,. We can take you to a donkey refuge too if you are interested. It is outside Marrakech and run by two retired English solicitors, a husband and wife team.

The day after I met his mother (whilst Lahcen was off somewhere, perhaps with his childhood mates), I was taken to the famous Rissani markets by his brother Omar. (Photos of these markets are here.) Omar was about 26 years old and spoke what he laughingly referred to as “desert-English”, so not very well. Ha ha! Our first stop was at a traditional apothecary for some herbs for my “Morocco belly”, which I trustfully consumed. I also wanted to buy some traditional Berber jewellery so, after showing me the donkey market where he humorously observed that, “The donkeys sometimes fight like two men over a woman”, we went to this old shop on the edge of the markets. Near the opening of the shop surrounded by Berber carpets (there was no door to hinder entry), clean water had been left out for the birds and the stray cats. We went up two steps and entered through the portal into a dark, cool, quiet shop, a world away from the market bustle.

(If you’d like to travel with Lahcen, stay at his Riad at Marrakech with his little family or be shown around the markets by Omar, let us know and we will see what we can do). 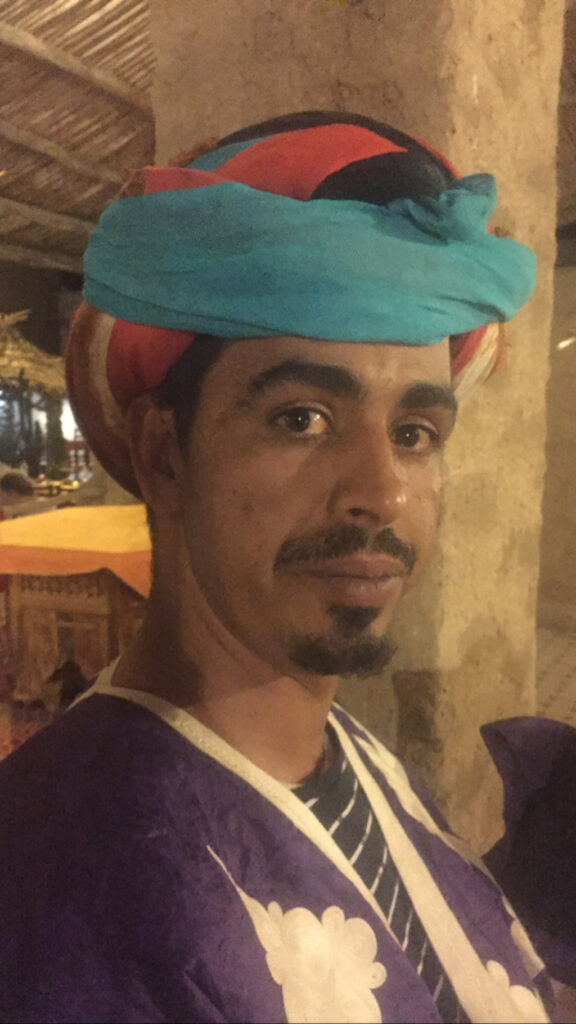 Straight off the canvas of a Delacroix