The inner sanctum of the shop was full of wonderful old things like ancient coins from further south in the Sahara and antique Berber items like bottles for kohl with which the Berbers traditionally adorn their eyes to guard against the harsh elements of the desert. Omar warmly greeted the adolescent boy inside who was deaf and mute, and who had the most extraordinary piercing light-blue eyes and a truly dazzling smile.  Going from his appearance, the boy was obviously very lovingly cared for and he and Omar seemed to speak playfully to each other in a kind of sign language.

Meanwhile I was served by Abdul. I could tell immediately just from his face and demeanour, as well as his perfect English, that he was highly educated. During the course of our conversation that morning, he told me that he had a PhD in cultural anthropology from the university at Rabat and that he taught illiterate people to read and write, how to treat women and how to behave in the family in a more kind and humane way. He said to me that he did what he did to keep what he referred to as “my people” away from the dangers of extremism. The way he said just those two words,  “my people”, had a tinge of sadness to it and a quiet nobility that touched me.  We also talked about politics and briefly about the problems being caused by the Iranians in Yemen, Syria, Iraq and elsewhere. It was his cousin’s shop. I told him that I was happy to support a family that left water out for the birds, and he seemed to appreciate that. He told me that the necklace I had chosen symbolised the seven tribes and the direction for finding water, so it was a necklace that symbolised life. He sold me a quality item; not the usual low quality stuff purchased by tourists and sold to them by wily merchants. He was still a clever negotiator on price – that is the Moroccan way – but it was okay.

After I had paid for my purchases and was preparing to leave, Abdul unexpectedly said to me that the next time I came to Morocco he would take me with Omar for a week to meet the tribes and see the villages in the sand dunes. Then, he leant down to me and touched my cheek with his as goodbye. I spontaneously stretched up and touched his other cheek with mine, and a flash of surprised “something” passed over his visage. I am not sure, but I think it was recognition (or maybe realisation is a more accurate way to describe it), but I can’t pin it down exactly; it was ineffable. 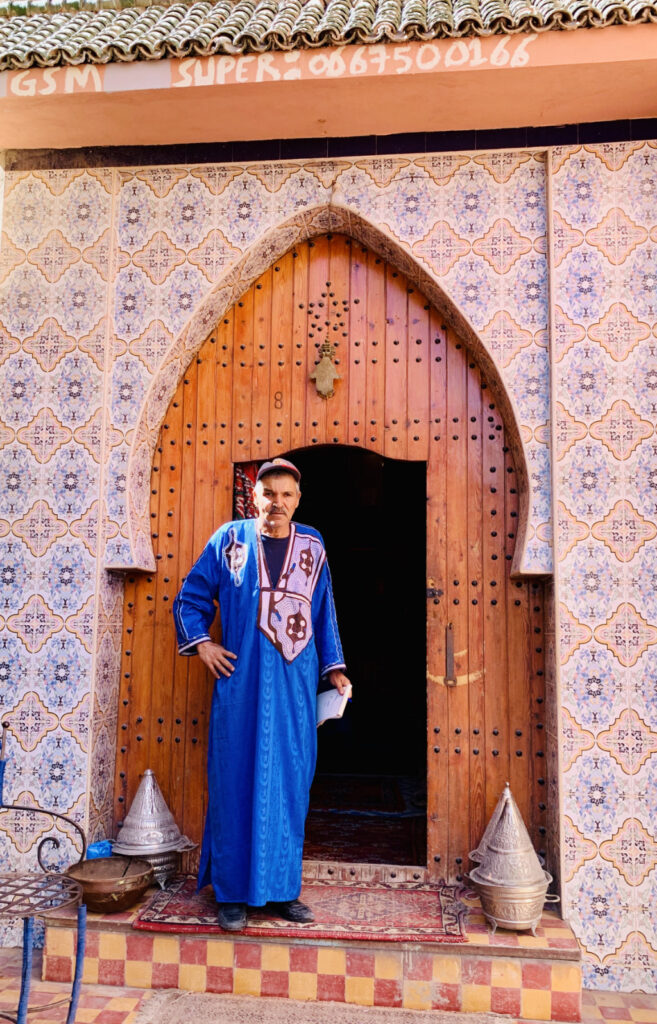 The portal of the Shop of Old Things with the owner standing outside.

To this day I regret that I didn’t obtain Abdul’s email address or give him my business card, and I think it might be for cultural reasons that I have had so much trouble obtaining it since via other Berber with whom I am in contact. Perhaps it is some kind of funny possessiveness or simply has some economic motive that I can’t really fathom.  However, Aziz who communicates with me in French and who describes himself as the receptionist at the hotel Auberge du Sud where I was staying – I think he is in fact a member of the family who own it – has promised he will try to locate the shop and see if Abdul will provide his email address for me. I informed Aziz that I want to be in contact with Abdul for who he is, and because I think it is good for my modest Iranian dissident connections to be in contact with good people who have a moderating influence in the Arab and Berber world.

The description of the shop I gave Aziz was, “it is on the edge of things, on the other side of a portal with an Islamic door frame, there is water for the birds outside, an angelic boy with piercing eyes the colour of heaven inside, and that it is where I found the Berber necklace of life”.

After leaving Abdul in the antiques shop, Omar took me to where Lahcen was waiting to take me back to the Hotel where that evening, I was to meet another young Amazigh.

If you’d like us to organise your own visit to the shop of Abdul’s cousin to search for lovely old things, contact us at Aussies in Morrocco Tours™. We’ll also check if our friendly driver/guides Lahcen and Omar will be available when you travel.

← The Shop of Old Things - Part 1 of 2
See -> Slow Down to Explore -> Ask; Lift Your Moroccan Adventure from Bronze Medal to Gold. →
Aussies in Morocco Tours