My Journey to Stay with the Nomads

The Oasis for Lunch

For our visit to the nomads, we hired an air-conditioned 4WD vehicle, and the services of a young driver called Aziz, from Zaid the owner of our auberge Le Petit Prince. The first stop was a natural lake near Merzouga where sometimes you can see flocks of flamingos. After that, it was on to a market garden in a natural oasis in the desert for a picnic lunch with the market garden’s owner. He worked there all alone and rarely saw people; his only travel was driving once a week to Rissani to visit his wife and children and sell his produce. We ate delicious, stuffed Berber pizza and fruit and we drank, of course, Moroccan tea or “Berber whiskey” as the gardener called it. 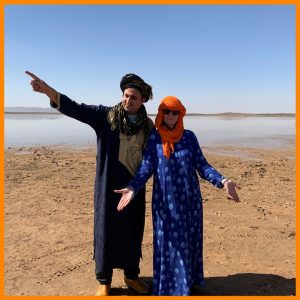 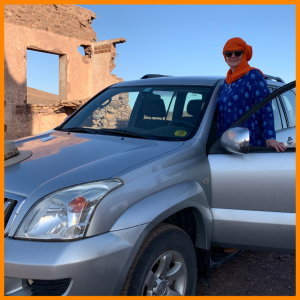 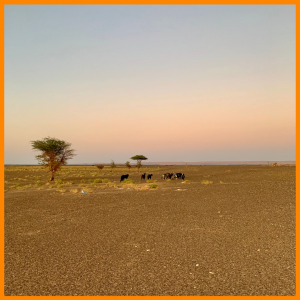 Later that day, we paid a visit to the village of Taouz (now half-abandoned with many of the traditional buildings gradually wasting away with the passing of time), where a few shy heads could be seen briefly peeking out of dwellings to glimpse the visitors to their village.  In general, few local people were visible – the village seemed quite empty –  perhaps they were sheltering from the heat and enjoying the post-lunch siesta. We saw the house of Mouna’s maternal grandmother, now mostly destroyed by time. It is a melancholic feeling to witness the passing of time in that way. It is rather sad, but also calming like a sunset.

Then it was on to the nomads who live on the edge of the dunes, but on the opposite side to the small town of Merzouga. We arrived there in the late afternoon. We looked around the camp, located and used the nomad version of a toilet (believe me, that is an experience in itself) and took some lovely photos of the desert including their goat herd, acacia trees and the sunset that was made all the more strikingly gold by the airborne sand. Mouna and her brother Youssef played soccer with a little nomad girl, and Mouna sang some nursery rhymes with her in the Berber language. The child had no playmates so was very excited by our visit. As night-time darkness was approaching, I spent some time getting my things in order so that I didn’t have to scratch around for them in dark with only the benefit of the torch Youssef had supplied (along with tissues, a sleeping bag and some lollies for the nomad children). 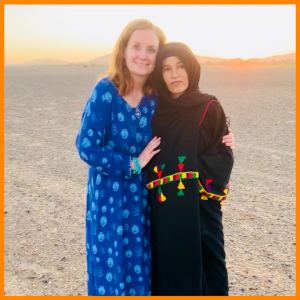 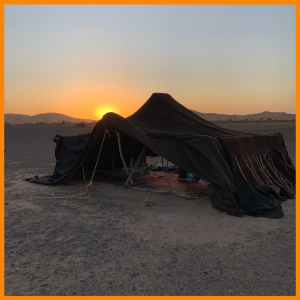 As it was the night of the full moon, Youssef advised Mouna and me to watch for its ascension. We were all in the nomad tent made of camel hair, looking towards the horizon when suddenly there it was, large and luminous in all its glory in the night sky. In that moment Youssef spontaneously outstretched his hand towards mine and I took it. His was a gesture of pure human, brotherly solidarity from a person who feels strongly the desert-pull in his veins.

Only one generation earlier, before Youssef’s paternal family had settled into village life (so the sons could receive a formal education), they, including Youssef’s father, had been nomadic shepherds in the south of Morocco near Algeria.  His father and at least one of his father’s brothers later returned to this desert region to keep watch over the border, serving there for many years as members of the Moroccan military. Thus, the life stories of both Youssef and his father are testaments to the power of origins because really, when you think about it, the tourist guides of the desert, such as Youssef, are likewise continuing their forebears’ tradition of shepherding.

Dinner that night was a slow-cooked chicken tagine eaten with the nomads at about 9.30. We sat on carpets woven by the nomad women, under a carpet of stars overhead.  Youssef, Mouna and the driver, who all spoke Berber, talked quietly with our hosts and translated for us. Mouna had also mentioned to me earlier in the evening that the young nomad mother, pregnant with her second child, was sad because her husband was in prison for a few months for failure to pay a debt.

After dinner, we all retired to our respective tents to sleep. Youssef literally tucked in Mouna and me under the blankets covering our sleeping bags. Then he let down the sides of our tent and departed for his own. It can be cold in the desert at night, but my sleeping bag and blanket were cosy and the inner darkness of the tent was comforting.

The next morning, I got up early to see the dawn twilight, and then the full sunrise. Later, while the nomads were cooking the breakfast, Mouna and I walked some distance away to the chook pen where the stringy-looking chickens ran away from us, perhaps fearful they were being sought for the next tagine. Then after breakfast and after saying our goodbyes to our wonderful hosts, we continued our journey by making our way around the other side of the dunes back to the auberge (coming full circle). We stopped on the way at a famous large hotel overlooking the dunes, called Yasmina, for a coffee or freshly squeezed orange juice, where, on the contrary to our stay at the auberge Le Petit Prince (read more in the Part Two blog post here), there were many rally drivers staying. 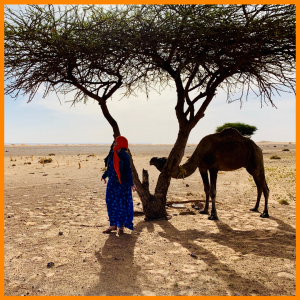 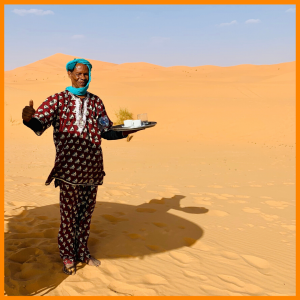 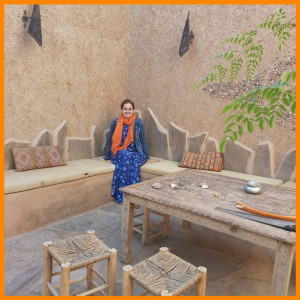 Café Run by an Australian Woman

We had made another stop at Café Tissardmine, likewise in the middle of the desert, owned and run for many years by an Australian woman and former performance artist. I wanted to meet her, check out her establishment, and because I also knew that she is happy to provide lunch for travelling visitors (provided she is given enough forewarning). I wanted the Australian perspective on her life in Morocco. She hosts artists on occasion, who stay a few days with her capturing the desert mystique with their paint brushes.

Just before returning to our auberge, we dropped in for a quick visit to the family of Zaid (the owner of Le Petit Prince) because Youssef knew them well from years before. By way of traditional greeting, Zaid’s wife proffered to us a fresh loaf of bread, cooked in the fire, and from which we each pulled a mouthful as we stood in a small circle. No butter, cheese or jam, plate or serviette, just a mouthful of honest still-warm bread, taken with the right hand (because the left is considered the one for ablutions).

Finally, we arrived back at Le Petit Prince. My friends left me to return to their routines at Erfoud and Goulmima and I stayed behind. There was one final thing I wanted to experience in the desert before leaving.

If you’d like to include a stay with desert nomads in your next trip, contact us at Aussies In Morocco Tours™. Likewise, if you want to meet Youssef and perhaps lunch with his family at Erfoud for a modest fee, let us know and we will see what we can arrange.

Next up: Part 4: Art and wisdom in the desert and returning to Australia