If you’re a woman travelling to Morocco for the first time, you may have some reservations about it. You might be concerned about your well–being. To begin with, there is your health to consider. That is addressed by compulsory medical and health insurance. There are also the tips about what to do (and to avoid doing) in order to minimise such issues – that you will find on our website ( here for example) and in some of our other blog posts. There is, secondly, concern about terrorism and other catastrophic events such as floods. Fortunately Aussies In Morocco Tours™ has its crisis management insurance and a mobile safety app which we talk about here.. Thirdly there are also personal safety issues like pickpocketing and being hassled with unwanted male attention.

This blog post is about how you can minimise the third category of risk, being the potential risk to personal safety arising from daily, personal interactions and behaviour and excluding those that are related to your health or to any large-scale disaster.

We’ve travelled to Morocco many times in the past several years, both as solo female travellers and with others, often for several weeks at a time. During our visits, we’ve been fortunate enough not to experience any serious incidents relating to our physical safety. Given this personal experience, we’ve always felt that Morocco is, from this angle, a relatively safe place to travel. We are not alone in this regard going from the high number of solo female travellers of various ages whom we have seen during our times there.

At the same time, it is a place where you need to be aware of your own personal safety in order to minimise risk, so we’ve put together some of our top tips for female travellers in Morocco. 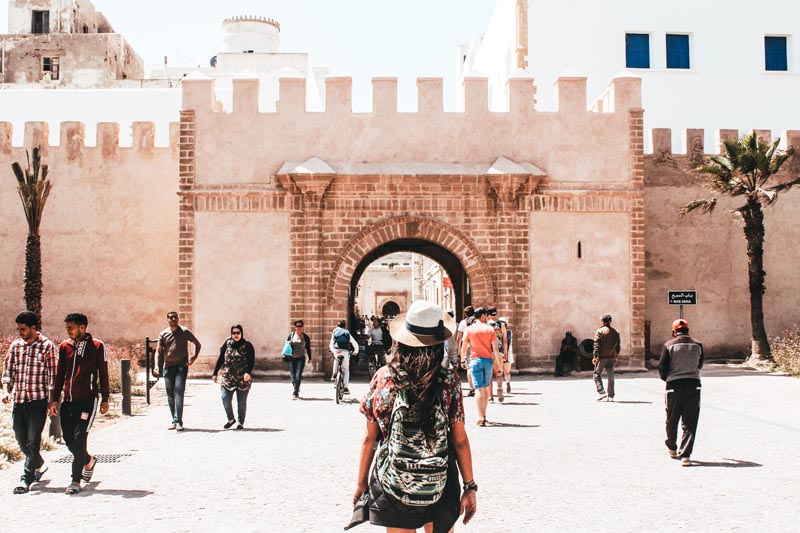 We approve of the hat the female traveller is wearing in this photo, but we suggest that covered arms might actually protect her more from the sun. Note the strong light; the further south you travel the more washed – out the palette, particularly once sand from the dunes starts to influence the atmosphere.

Prepare to be noticed

As a female traveller, it’s a given that you will receive attention from local men at some point during your Morocco trip. (just as you do in France and Italy, we might add!) This might be the form of comments, catcalls or men approaching you. While it may be flattering or funny at first, it will get old quite quickly.

We recommend that you: 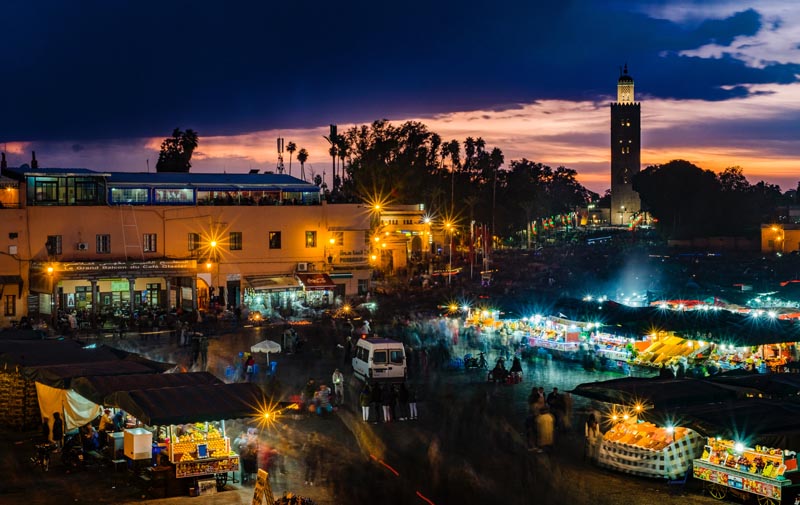 On a cloudy evening the lights of the night markets in Marrakech make it seem as though the stars have come down to earth to do their shopping.

Speaking of men, if you are travelling with a male friend or boyfriend, we suggest saying that he’s your husband, if asked. This is because in Morocco, sexual relations outside of wedlock is illegal, and platonic friendships between men and women aren’t very common. In the end, we’ve found it’s much easier to just say you’re married than try to explain the complexities or nuances of your relationship status.

If you are travelling solo and own a ring that looks like an engagement ring or wedding band, wearing it on your ring finger can also help avoid unwanted attention. And if anyone asks where your husband is, saying that you’re meeting him at the next destination will also be much easier for them to digest than trying to explain that you’re travelling without him. 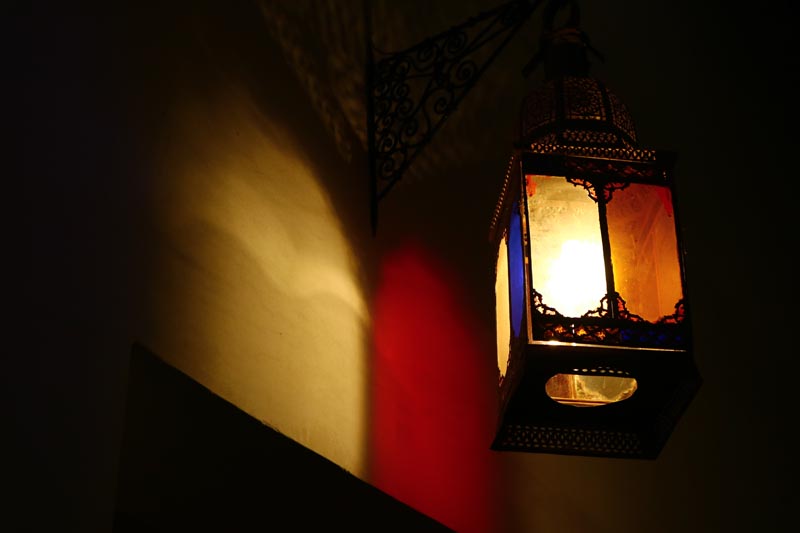 As a muslim country, Morocco frowns upon alcohol consumption, at least officially. For this reason, you’ll generally only find that alcohol is served in the more upmarket hotels, riads and restaurants that cater to western tourists.

If you fancy a night out in bigger cities like Marrakech or Casablanca, we suggest heading to an upmarket hotel or nice restaurant where they serve alcoholic beverages. This is because bars in Morocco are male-dominated establishments and the only other women you’ll see there are generally sex workers.

Some of our favourite spots in Marrakech include Le Foundouk for a traditional Moroccan meal with a good wine list, La Mamounia for unparalleled opulence, and Kechmara for a nice rooftop bar and western-style food and drinks. Ask your accommodation to contact the restaurant to see if they are prepared to send someone to collect you and bring you back to your accommodation later. As you can imagine, this can save you hassle and anxiety. If not, maybe your accommodation will provide someone to do this for you. Remember to tip that person. We have a wallet-size, laminated list of recommended tip amounts for various activities that we give people on booking with us.

If you do go out at night, we also recommend bringing a business card of your accommodation with you and if the address does not appear on the card in Arabic, ask the person at the front desk if he or she can write on it for you. You can also program the address into your phone, and wherever possible take taxis rather than walking. Note that we have an upcoming blog post that includes a discussion about a mobile app to use in Morocco when hiring taxis, which will save you some hassles in relation to fees.

At nighttime it’s also good to be extra vigilant when using your phone – try to avoid having it out for too long, holding it out near the road or footpath, or up in the air (taking photos etc.) We’ve never had anything happen to us, but as in lots of bigger cities around the world it’s not unheard of that people have their phones swiped out of their hands if they’re not paying attention. Be sure not to wear headphones at night either, especially if you’re walking anywhere alone, so that you can remain aware of people and things around you, including swiftly-passing motorbikes. Dangling headphone cords are also not a good idea, for the obvious reason.

You can learn more about travelling in Morocco, including safety issues, on DFAT’s Smart Traveller website. We recommend registering your travel to Morocco with Smart Traveller before you depart (you will need to log into an existing account or create an account to do this).

If you have any particular concerns about travelling in Morocco, please contact us at Aussies in Morocco Tours™.

← The truth about tipping, bargaining and commissions in Morocco
Moroccan medinas: how to lose yourself without getting lost →
Aussies in Morocco Tours