Off the Beaten Track; Exploring Morocco’s Mountains and Rivers During High Summer: Part 2 of 2

This area is cool in summer and has many delightful spots in nature to explore such as hidden waterways with an abundant birdlife. We stayed at a guest house located at a fascinating rock formation that emerges from a river beneath, known locally as “Monkey Fingers”. It is run by an Amazigh self-taught artist called Fatima Mellal who has exhibited internationally, and her sister. The accommodation is modestly priced and very clean, but more importantly it is serene and the location is breathtaking. Imagine sitting on the carpeted and pillow-clad terrace outside, while enjoying traditional food such as tagine or brochette while digesting the beauty of the gorge.

Early the next morning, we went to a lesser-known gorge nearby. Birds sang merrily around us, bathing intermittently in the crystal clear water that was moving peacefully through the rocks. It was less than a 10-minute drive along the main road from Fatima’s place, where we got out and descended into the locals’ luscious, green, common garden flourishing next to the waterway. We were pleased at the nice drop in temperature to which the stream treated us. Later in the day women would come there to wash their clothes, whilst keeping each other company and chatting at the same time. We were also surprised, midmorning, upon opening our eyes after a brief doze, to see two Moroccan women had suddenly joined our little haven, silently wading towards us through the waist-deep water, transporting heavy loads of grass on their backs.

The next day we did a short tour that included the Valley of the Roses, which is like a field of fuchsia – even the taxis there are bright pink! The valley is famous for making rose products, and it was a great opportunity to invest in some genuine rose water, rose oil and other rose-based cosmetics, before returning to the guest house.

On the day of departure from Boumalne Dades we visited the cave-dwelling nomads nearby. Most of the men were out with their flocks, leaving their wives and children at home, but we had the chance to drink tea with one man in his nineties, nearly blind, and his similarly aged wife whose face was covered in traditional Berber tattoos. During the course of our tea-drinking, we asked them what was the most amazing thing that they had ever seen in the desert. The man answered (through our interpreter/guide), “Rain and grass”. He also spoke a little French and when our departure was imminent he kissed us on the cheeks goodbye, French style.

If you would like to stay at a guest house that has more western style food options and is more luxe than Fatima’s homely offering, Dar Blues is a beautiful place with a stand-out garden and a host who cannot do enough for you. As with so many other Moroccan riads, you may have difficulty reading your map or travel book at night there. Lighting is dim like firelight. It is as if they do this to protect the sanctity of darkness, a time that was always destined to be for relaxation, contemplation and quiet talking amongst family and friends. 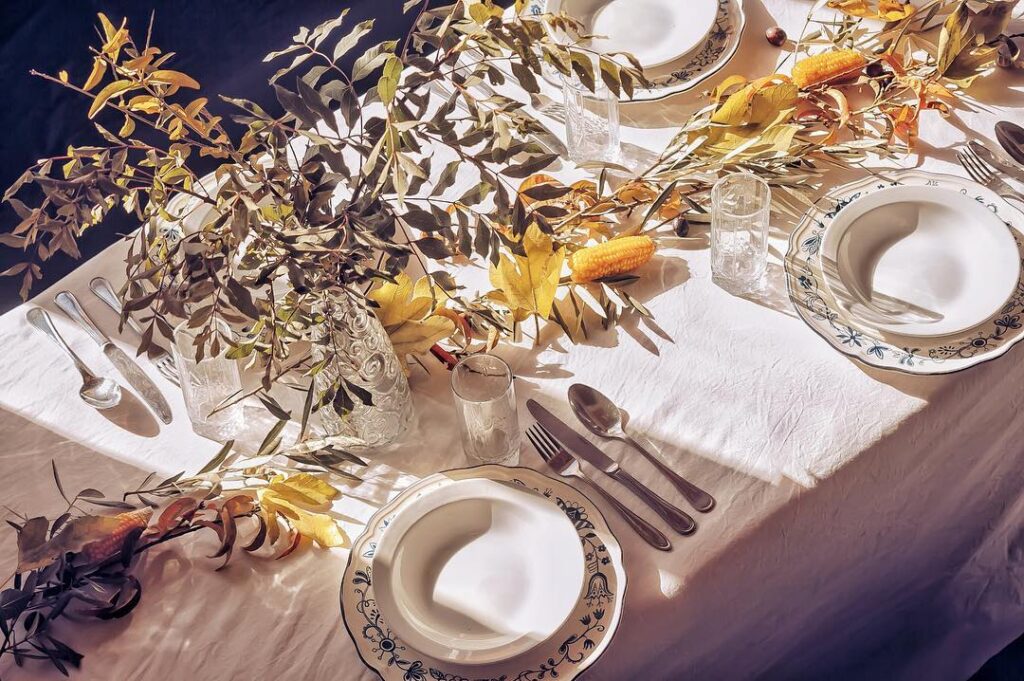 Many tour operators offer day trips to Ouzoud Falls from Marrakech, but we don’t recommend doing this. It is a long way to drive, a little under three hours each way, leaving you with a scarce amount of time to enjoy this spectacular part of Morocco. Instead, we suggest staying overnight in the area, allowing you to skip the swells of day-trippers and have enough time to admire the spectacular waterfalls and the people’s lives that have been built up around them.

The long walk down the stairs to the bottom of the Falls takes you past smoking tagines in readiness for lunch, brightly coloured traditional robes for sale and little nooks where you can  stop for a mint tea. Some Moroccan parents engage laughingly with the monkeys and encourage their children to feed them as they skip cheekily in front of the family. A beautiful sight to see, but we wouldn’t recommend doing this yourself as the monkeys can be a serious human health risk. Once at the bottom you can bathe in the water, or board one of the many brightly decorated barges so the driver can row you all the way to the outer edges of the cascading waterfall (if you want to get up close and personal). Prepare to get soaked!

Photography enthusiasts will find unbelievable photo opportunities here. Bear in mind what we said earlier (read Off the Beaten Track – Part One blog post) about the need to ask permission before aiming your lenses, particularly at women. We suggest you go early in the morning when the crowd is thinner, even at sunrise if you can make it, or later in the afternoon. Late morning is the most crowded time.

The next day a visit to the lovely river community nearby is a great idea. At the carpark, you will be greeted by boys on donkeys offering to take you along the river’s edge for around 10 dirhams (about 1 euro). If this is appealing to you – go for it, but we think walking is just fine. On a sunny day you walk past locals cooling their drinks in the stream, making and cooking bread in woodfire ovens, and see little handmade bridges that connect two sides of the sunflower-lined waterway. Rather than ride a donkey, you might like to watch them graze peacefully on the luxuriant green grass, while teams of ducklings propel themselves down the stream in unison behind their mothers.

We recommend staying at Hotel Palais Ouzoud, owned by a Dutch-educated Moroccan who has given up his successful international career in New York as a tax lawyer to return to his roots. He speaks excellent English and has a very hands-on role in the management of the place. This venue is lovely and is a little more focused on catering to western taste. The guests’ terracotta accommodation frames the hotel’s wide, deep blue pool, and green mountains roll lazily in the background. The location has previously been the site of many professional photoshoots and is a fantastic place to get that perfect Moroccan holiday shot, taken either by yourselves or with the assistance of our driver. 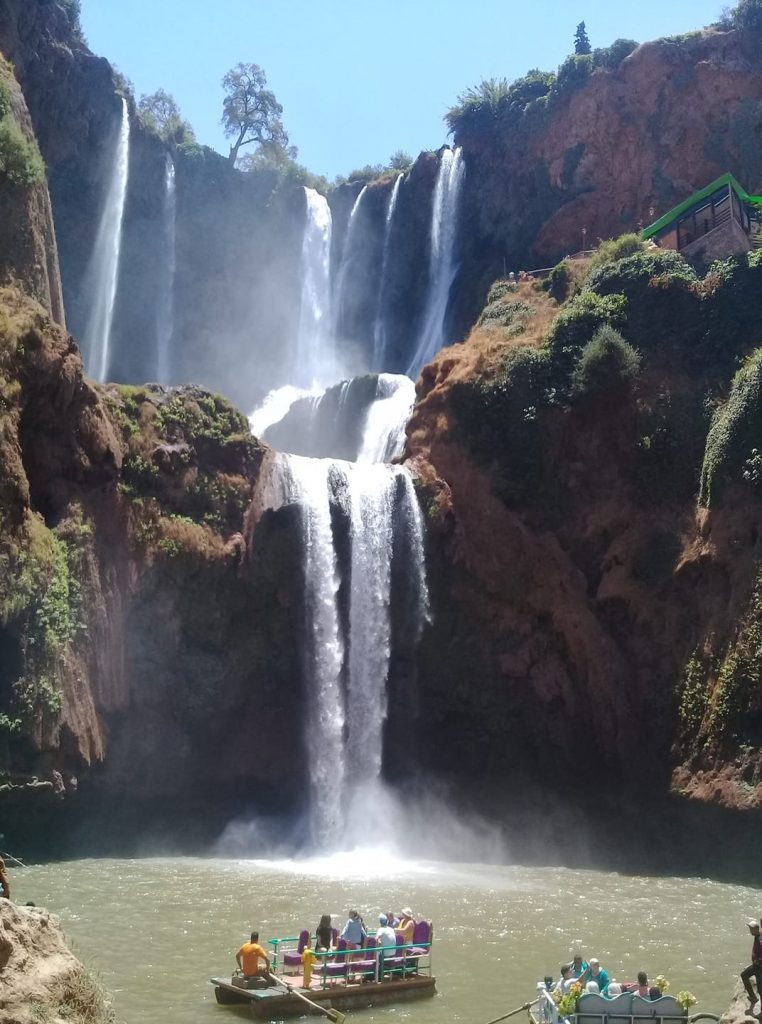 It is surprisingly fun and so refreshing to be taken into the water spray of a waterfall on a colourfully decorated barge.

Then it is back to Casablanca for a flight the following day. It takes most of the day to get there, driving through some magnificent natural mountain scenery. When you arrive you could squeeze in some shopping at the boutiques there that sell brilliantly colourful dresses from Mali, or visit the Mosque by the sea, or you may wish to just relax and prepare for your flight the next day. If this is the case, we would suggest a hotel close to the airport; more expensive but, if you have an early flight, the 15-minute commute is invaluable. For some other styles of recommended accommodation options in Casablanca, at least for those intending to stay a few days or more, you can read our blog post here where these are mentioned towards the conclusion of it.

If you like the sound of this itinerary, but aren’t sold by all aspects of it, don’t worry. We at Aussies In Morocco Tours™ can always adjust the number of days at each location, the places you visit, and where you stay based on the time you have available and your interests. Life in Morocco is all about letting go of the small things and living in the moment, allowing yourself to open up to nature’s poems and secrets. Join us on a tour and allow our driver-guides, descendants of the traditional inhabitants of the land, to open Morocco’s doors and heart to you.