Morocco – Follow in the Footsteps of Great Artists Delacroix, Matisse and Dali: Part 2 of 3

In this blog we continue exploring Morocco’s influence on the work of great artists – this time we look at Dali and also consider how you can apply iconography of the desert to your own journey with Aussies In Morocco Tours™.

A few days into your Morocco journey you arrive at the desert in the south. The young men, sons of the nomad shepherds who came into the villages so their sons could go to school, and with faces often prematurely weathered from the sun, wear with pride the traditional turbans (that sometimes seem preposterously large) together with the azure blue robes of their Toureg ancestors.

In the late afternoon, camel trains walk across the hot dunes casting shadows that are reminiscent of the long-legged Elephantine creatures making their way in solemn procession across the sand depicted in at least one of Dali’s desert psychoscapes. Dali himself said

“Every morning when I wake up, I experience an exquisite joy – the joy of being Salvador Dali – and I ask myself in rapture: What wonderful things is this Salvador Dali going to accomplish today?”

Later, at the foot of the dunes, you gaze up at the carpet of stars stretching in a cosmic arch above you. The same stars Dali looked at each night he spent in Morocco. As you sit by a fire, your hosts play their drums as though they were collectively the heartbeat of Africa.

The desert psychoscapes of Dali and of the Nomads of Morocco

Dali was a leading Surrealist painter if not “the” leading one (however that is measured), before he was kicked out of the “club” by his fellow surrealists. This occurred supposedly because of Dali’s support for General Franco but perhaps more for his clashes with André Breton who led the Movement and who wrote The Surrealist Manifesto.

Dali, like Delacroix and Matisse before him, also spent time in Morocco including at Tangier and at Essaouria – an old Portuguese Port city formerly called Mogador – and now a seaside resort that is a bit like Australia’s Byron Bay in vibe.

His art is particularly well-known and almost immediately identifiable.

Dali’s depiction of psychoscapes of the mind in his desert paintings is fascinating. It is as though he intuited that the earth, the Great Mother, shapes us as our primary nurturer, just as our own mothers do. It is our primary caregiver who endows or tortures each one of us (as the case may be) with various psychological constructs, as we make our way across the desert of life inside the universe in our own heads.

Albert Camus, a Nobel laureate in Literature, had likewise written about the North African desert as a metaphor for the vast, desolate expanse of the mind, with the Arab’s belief in fate at its epicentre. Of course he spent his childhood in Algeria, which the desert of Morocco borders, but the people of the Moroccan and Algerian desert are Berber or more correctly: Amazigh; not Arab. 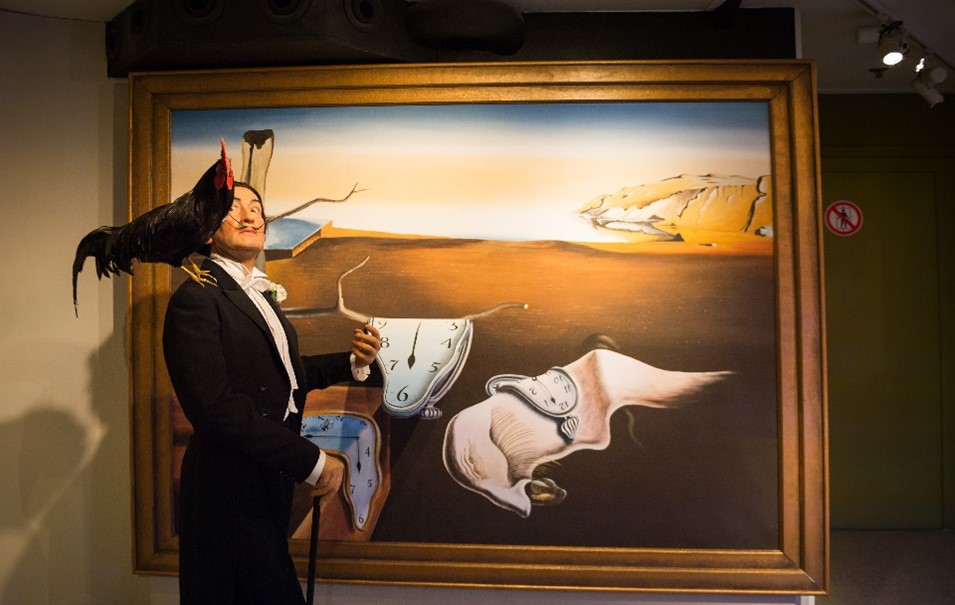 (A wax model we think! of) Dali with a rooster on his shoulder in front of a depiction of perhaps his signature painting: The Persistence of Memory, 1931, oil on canvas, 24 x33 cm, Museum of Modern Art, New York. 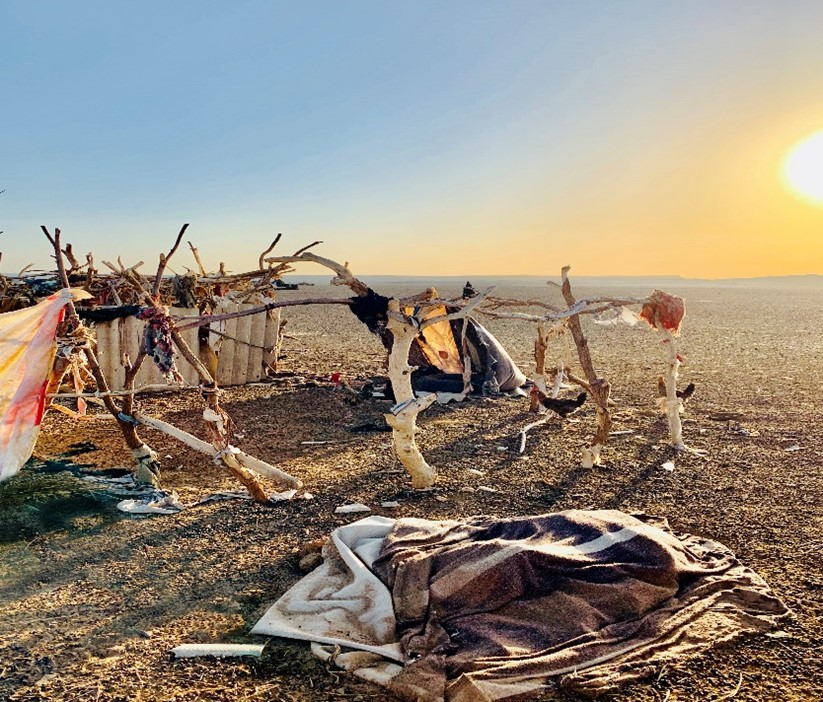 Nomads’ chook pen at the Erg Chebbi Dunes at sunrise reminds us of Dali’s painting above, which incidentally makes a comment about the nature of time that resonates with Moroccan attitudes to it. We find the synergies between the 2 images borders on the uncanny! (Photo taken by Cara our principal, October 2019)

Things, customs, conditions, omens, manifestations and animals of the desert

It goes without saying that the Amazigh nomads and their descendants too, share in a psychodrama of the desert. For them there is symbolism, signposts by which to navigate, in all aspects of desert life.

Their jewellery and the tatttoos on the faces of the women from the older generation, are full of references to fundamentals such as the constant search for water as the meaning of life, as fertility, as woman. Palm trees with their fronds as hair and oases are likewise of the feminine.

Bread and ovens are sexual in connotation. As is water (and tea) which bubbles away and food cooking on campfire embers. The cooking pot on the fire is again of the feminine and sexual, while the ladle is its male counterpart, together with the piece of wood fueling the fire and the bellows stoking it.

Acacia trees, prickly and forlorn, unless in small groups or “encampments”, symbolise the male hardened by his difficult environment as he stands before the immensity of the desert.

The iconography of the desert includes behaviours and portents. The people of the desert believe, for example, that excessive cold or dryness and excessive heat in relationships are to be avoided. At the same time it is solar energy that fuels the water pumps for the desert wells.

Wells (for man and beast alike) axiomatically reference life-preserving water, but the well, as motif, also resonates with concepts of depth and profundity, calling to some to be further explored. Mirages in life and in the desert, can, on the other hand, tempt a man towards his annihilation.

The creatures of nature also have their symbolism. Camels are symbolic of women. Ants are pain-causing troublemakers. The scorpion prefers to avoid the heat and seeks solace in the dark cooler earth and only inflicts its deadly poison in self-defence, or so it is said.

Each desert Amazigh man, woman and child is a grain of sand of the curvaceous dunes, and each is buffeted by the winds of fate. On the feast day of Eid al-Fitr, in this fiercely harsh world, the mother prepares the lamb for sacrifice and her sons grow up to hunt in the field of gazelles.

There is much more to be learned of the desert iconography – in respect of which Dali’s art is a kind of blood relative – and tribal connection is, after all, important in the desert context.

You can experience the Moroccan desert with Aussies In Morocco Tours™ and go deep desert to make contact with that otherworldly feeling Dali captured, as well as visit the nomads who inhabit this place. Aussies In Morocco Tours™ has a blog post about visiting the nomads (“Morocco – More Depth Less Surface Part 3”) but deeper desert, even closer to the Algerian border, is possible if you let us know in sufficient time. You could also stay a couple of days in the dunes at Cafe Tissmardine to paint the desert. It has been run for at least a decade by an Australian artist who hosts regular artists’ retreats there. Or maybe you would just like to drop in there for lunch, on your way back from visiting the nomads. We also talk more about Café Tissmardine in the blog post referred to above and to which there is a link immediately below.

Like Dali (a Spaniard himself or more accurately a Catalan), you could always kickstart your experience in Spain, which at its closest point is only 14km from Morocco, and join a tour with us in Morocco from there. Aussies In Morocco Tours™ has written about the viability of doing this elsewhere (see our Visit both Spain & Morocco blog post here) as including Morocco as a sidetrip on a European holiday is popular with Australians.